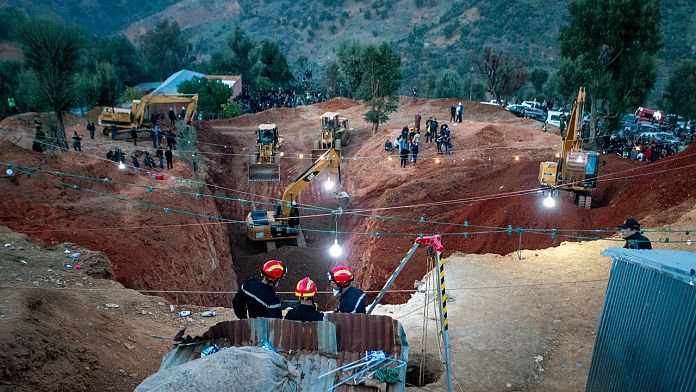 Rescuers continued to fight against the clock overnight from Thursday to Friday to try to save a five-year-old boy, stuck in a deep well in a village in northern Morocco since Tuesday afternoon, a tragedy that holds the kingdom in suspense.

Relief operations on the ground intensified in the evening around the well, with bulldozers, and could continue until the morning, AFP noted.

Drilling works”reached more than 27 meters, with the hope of reaching 32 meters in the next few hours, before digging a horizontal breach of 3 meters between the hole and the well to recover the child“, reported the MAP news agency.

A medical team was dispatched to the scene of the accident in order to “carry out initial examinations and resuscitation interventions on the child once rescued“, added MAP. A gendarmerie helicopter is ready to evacuate the child to a nearby hospital.

The rescuers are supported by topographers also mobilized on site.

The little boy, Rayan, accidentally fell on Tuesday into the dry well 32 meters deep, narrow and difficult to access, dug near the family residence in a village not far from the locality of Bab Berred, in the province of Chefchaouene (northern Morocco).

“In a moment of inattention, the little one fell into the well I was repairing. I couldn’t sleep a wink all night“, Rayan’s father testified to the news site The360.

“Rayan is much loved here in the village, not just at home, I miss him, it’s been three nights“, told AFP his septuagenarian grandmother Laaziza.

Help was able to deliver “water and oxygen through tubes in Rayan“, specified the Moroccan press agency.

“Our hearts are with the family and we pray to God that he finds his loved ones as soon as possible.“, wished the spokesman of the government, Mustapha Baitas, at the end of the weekly government council.

Mobilized for more than 48 hours, the rescue teams were unable to descend directly into the well because “its diameter does not exceed 45 centimeters“, said Abdelhabi Temrani, responsible for the rescue operation, on public television Al oula.

Rescuers also thought “to enlarge the diameter of the well but it was not possible because of the nature of the earth which could lead to a landslide“, detailed for his part the spokesperson for the executive.

The only solution: dig around the well to save the child whose survival has aroused enormous sympathy and solidarity on social networks, as far as neighboring and yet rival Algeria.

Hakimi the Moroccan and Mahrez the Algerian

The direct broadcasts of several Moroccan media are followed minute by minute by hundreds of thousands of Internet users, hanging on to the fate of the child.

The hashtag #saverayan (in Arabic) is still one of the main trends on Twitter in Morocco.

Moroccan international and PSG star Ashraf Hakimi shared an illustration on Instagram, accompanied by two emojis: the broken heart and the folded hands of prayer.

The Algerian Riyadh Mahrez, Manchester City star, was not left out, sharing on Facebook a photo of Rayan dubbed the hashtag #Stay Strong (Stay strong).

The emotion is such that the inhabitants of the region have flocked “In large numbers“at the scene of the tragedy – sitting patiently around the well – but sometimes hampering the work of the rescue teams.

“Rescuers work in very difficult conditions. We call on citizens to let them work to save this child“, urged Mr. Baitas.

This accident echoes a tragedy that occurred in early 2019 in Spain: in Andalusia, a 2-year-old child died after falling into an abandoned well 25 centimeters in diameter and more than 100 meters deep dug to find water.

The baby’s body Julen had been found after thirteen days of research on an exceptional scale.