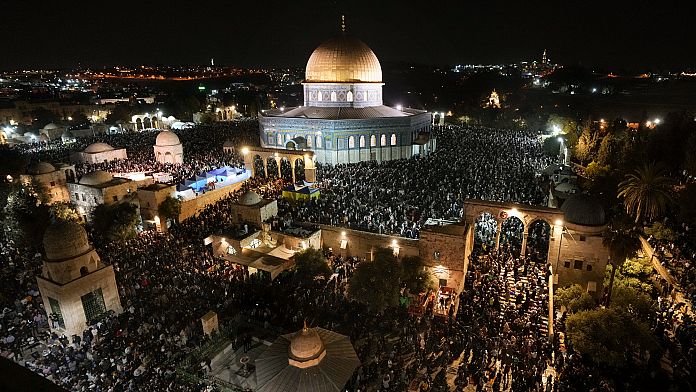 Clashes between Palestinian demonstrators and Israeli police left 42 injured, but none seriously, Friday morning on the esplanade of the Mosques, hotbed of tensions in the center of Jerusalem, said the rescuers.

“There were 42 injured in clashes with occupation forces“on the esplanade, located in East Jerusalem, Palestinian sector occupied by Israel, announced the Palestinian Red Crescent. An initial assessment reported 12 wounded.

Of the 42 injured, 22 were taken to a hospital in Jerusalem, but “none are in serious condition“, said the Palestinian Red Crescent.

From “rioters“threw stones” which caused the Israeli police to enter the esplanade and use “ways to disperse the crowd“, law enforcement said in a statement.

Over the past two weeks, violent clashes have injured more than 250 Palestinians in and around the Esplanade of the Mosques, Islam’s third holiest site and Judaism’s holiest site known as the Temple Mount.

These clashes have raised fears of a greater escalation between Israelis and Palestinians, against a backdrop of bloody anti-Israeli attacks and Israeli military operations punctuated by deadly clashes in the occupied West Bank since the end of March.

The new clashes come as Muslim worshipers celebrate the last Friday of the holy month of Ramadanwhich is due to end early next week.

This Friday is also “Youm al-Quds al-Alami“, annual day of “defense” of Jerusalem, initiated by Iran in the wake of the Islamic revolution of 1979.

Thursday evening, tenors of the Palestinian Islamist movements of the Hamas and Islamic Jihadclose to Iran, had organized a rally in the stadium of Gaza to mark this day and called for “defend“Jerusalem and the Esplanade of the Mosques.

The general Hossein Salamileader of the Revolutionary Guards, the ideological army of the Islamic Republic of Iran, had participated in this event by videoconference and affirmed that “the State of Israel will be defeated“.