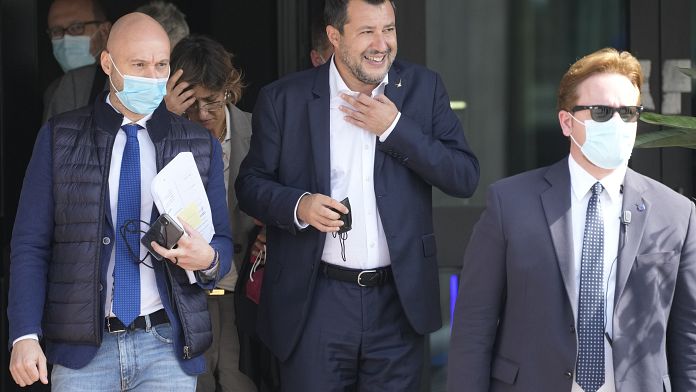 The trial of Italian far-right leader Matteo Salvini began Saturday in Palermo in the presence of the former Interior Minister, accused of having illegally blocked 147 migrants at sea in 2019 in dire health conditions by refusing to disembark.

The trial of Mr Salvini, who faces up to 15 years in prison, had opened on 15 September but was dismissed immediately. Saturday’s largely procedural hearing lasted less than three hours and Judge Murgia set the next hearing for December 17.

“Tell me about the seriousness of a trial where Richard Gere comes from Hollywood to testify to my wickedness”Mr Salvini quipped in front of journalists outside the court. “I hope it will last as long as possible because there are more important things that need to be taken care of“.

The American actor, whose arrival was requested by the Spanish NGO Open Arms that operated the stranded rescue ship and is a civil party in this trial, has indeed been allowed to come to testify, as well as the former Italian Prime Minister Giuseppe Conte, said Judge Roberto Murgia. Richard Gere boarded the Open Arms ship in August 2019 to support the migrants, a visit then derided by Salvini, then Interior Minister and deputy prime minister in the Conte-led government.

The court also accepted that Luciana Lamorgese and Luigi Di Maio, Ministers of the Interior and Foreign Affairs respectively, were among the witnesses.

The founder and director of Open Arms, Oscar Camps, assured journalists that the trial was not politically motivated. “Saving people is not a crime but an obligation, not only for captains but for the entire state“, he said.

Matteo Salvini, 48, is the leader of the League, a far-right anti-migrant party that belongs to the ruling coalition led by Mario Draghi.

Mr Salvini is accused of kidnapping and abuse of power for banning the disembarkation of 147 migrants rescued at sea by the NGO Open Arms in August 2019. He had refused for six days to grant a safe port to the Spanish NGO ship that was anchored off the small Italian island of Lampedusa (south of Sicily) as conditions on board worsened.

The migrants had only been allowed to disembark thanks to an order issued by the Sicilian judiciary after an on-board inspection that confirmed the seriousness of the health situation on the overcrowded ship.

Known for his controversial statements, particularly on immigration, Mr Salvini says he acted for the good of Italy and to dissuade migrants from embarking on the African coast for a dangerous Mediterranean crossing, stressing that the decision had been validated by the government at the time and Mr Conte.

Twenty-three civil parties, including nine migrants on board, are represented at the trial. The Senate voted last year to lift Salvini’s parliamentary immunity, paving the way for his trial.

In another similar case, the court of Catania, also in Sicily, had ordered the abandonment of the prosecution against Mr. Salvini, accused of having blocked at sea a hundred migrants rescued by the ship “Gregoretti” of the Italian Coast guard, also in the summer of 2019.

During the hearing on Saturday in Palermo, 406 migrants, rescued during several operations off Libya by the German ship Sea Watch 3 of the NGO Sea Watch, arrived in the Sicilian port of Pozzallo to disembark, according to the Italian agency AGI. Salvini served as Interior Minister and deputy Prime Minister in Conte’s first government from June 2018 to September 2019.