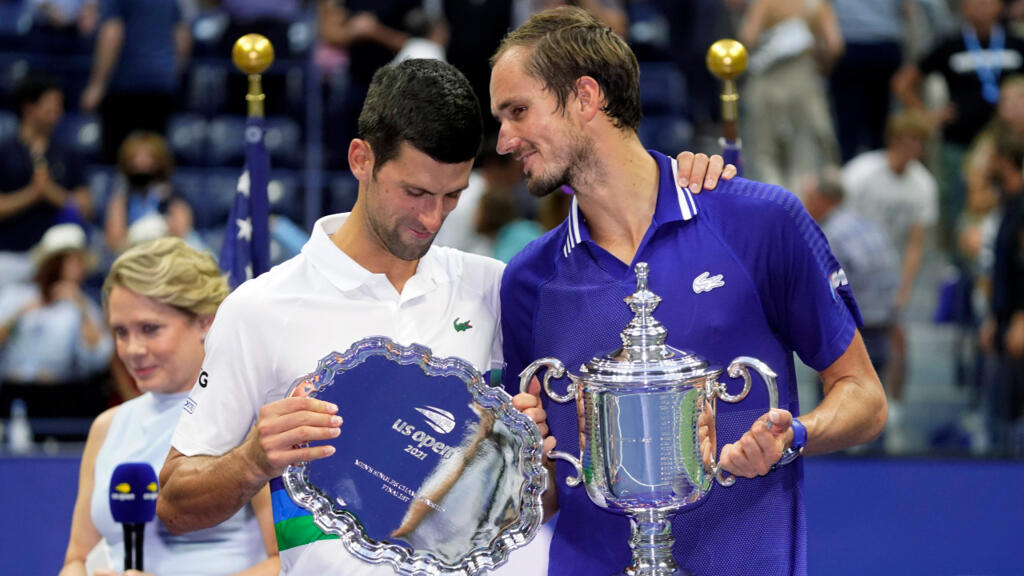 Imperial on court, Russian Daniil Medvedev won the final of the US Open, his first major title, by outclassing Novak Djokovic (6-4, 6-4, 6-4) on Sunday in New York. A win without appeal that deprives the Serbian world number 1 of the feat of a Grand Slam over a calendar year.

Author of a perfect finish, the ruthless Daniil Medvedev won the US Open, beating 6-4, 6-4, 6-4 Novak Djokovic, who did not bear the weight of History, thus failing to achieve the feat of a Grand Slam over a year, Sunday, September 12 in New York.

“I feel sorry for you fans and for you Novak, we knew what you could achieve. When you see what you’ve achieved in your career… I can say it now, but for me you are the greatest player in History”, paid tribute to him the Russian, who finally wins his first major tournament.

In doing so, he prevents the Serb from setting a new record in the matter, since he remains stuck at 20 crowns, still tied with his eternal rivals Roger Federer and Rafael Nadal.

“If there is one who deserves to be here now, it is you, Daniil,” Djokovic had just congratulated him seconds earlier, who could not suppress a few tears.

And for good reason : at the gates of the greatest feat of the Open era, he failed, like the Swiss and the Spaniard before him, to join the decidedly closed club of champions to have won the Australian Open, Roland-Garros, Wimbledon and the US Open in the same year.

To beat his rival, the Russian did it exceptionally, coming off the match of his life and demonstrating that he had learned the lessons of the two finals lost, in 2019 to Rafael Nadal after an epic fight, and in February this year, against Djokovic, when he missed his match.

His third attempt, marked by icy determination, was the right one. For he was first imperial on serve, taking the risk – often winning-of hitting his second balls with the same power as his first. With, at the end, a perfect first set (6 aces, 16 in total).

He also shone with his ability to accelerate in forehands and always counter-attack at the best moment. Virtually none of his choices turned out to be bad.

In front, it soon appeared that the Serb was losing another match, against a huge pressure having enough to liquefy any champion. Even him.

In the second set, however, Djokovic had the opportunity to break. Three times from the first game. After failing, he hit the racket several times on his right thigh and since it had not broken, he smashed it on the cement two games later, led by yet another gross error.

“You touched my soul”

The Serb never knew how to get back into the match, as he had always had the ability this year, during the 27 Grand Slam victories bringing him to this 28e match supposed to be for glory.

Because Medvedev, past this brief threat, never loosened the vice. He continued to pressurize the world No. 1 to take the second set and go on to win four games in a row in the third.

The astonishment was immense in the Arthur Ashe Stadium where the public, determined to witness History, was almost 100% behind him. The 23,000 spectators, including Leonardo DiCaprio and Spike Lee, woke up when he finally made the break for the first time against the Russian, who suddenly became feverish, after a double fault on his first match ball.

At the change of sides, Novak smiled with emotion. “Even though I didn’t win, my heart is full of joy because you made me special tonight, you touched my soul, I had never felt that here in New York,” he said afterwards.

Certainly warmed up, Djokovic was already inconsolable. Because opposite, it was the tsar the evening star. Almost elsewhere in the nanoseconds that followed his match-winning ball, Medvedev let himself fall like a dead fish on the court.

The ovation of the audience gave him oxygen to rise. A deserved ovation because what he achieved, no one had done this year.