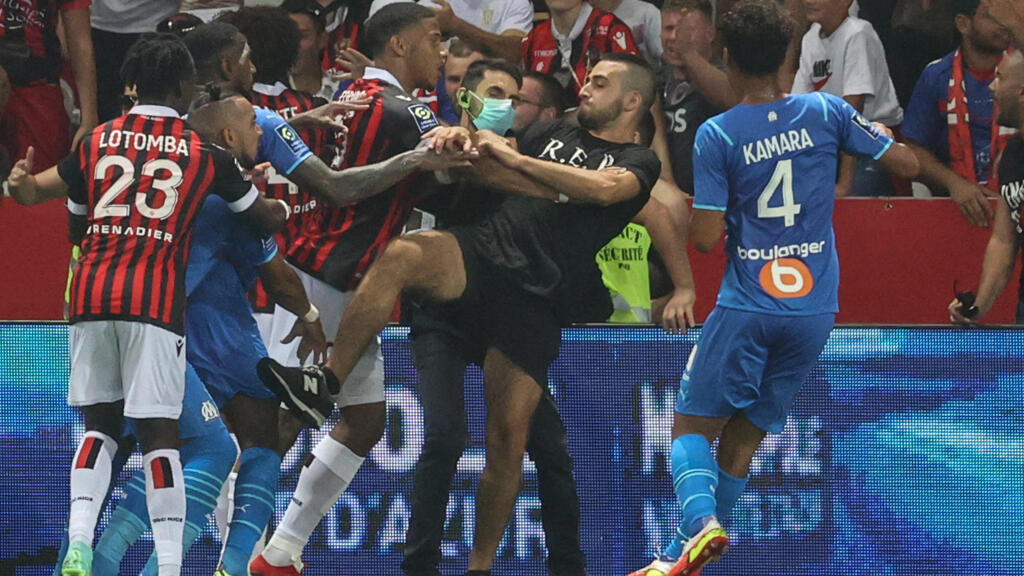 The disciplinary commission of the Ligue professionnel de Football (LFP) has pronounced “severe sanctions” towards the actors of the incidents of the match between Nice and Marseille, which will be replayed on neutral ground.

Extraordinary events, extraordinary convictions. The disciplinary commission of the Professional Football League (LFP) met Wednesday 8 September to decide on the sanctions of the actors between Nice and Marseille, interrupted the interruption to the 75e minute August 22, 2021 due to a ground invasion and a general brawl.

The sanction was announced shortly after 11 p.m., after a marathon session of five hours, including ninety minutes of deliberations.

And for good reason: the file of scuffles that caused the interruption of the Mediterranean derby was out of the ordinary. To the point of pushing the LFP to relocate the meeting to a Parisian hotel at the foot of the Eiffel Tower, rather than in its premises, considered too narrow.

“What has been essential for us is the level of importance of the incidents, which constitutes an extremely high level of disorder, almost unprecedented, and which must lead the commission to enter a zone of sanctions which is, itself, very severe and very high”, he continued.

The meeting of the 3e day of Ligue 1, stopped on the score of 1-0 for the Gym, will have to be replayed, behind closed doors and on neutral ground.

This announcement does not go in the direction of the Niçois, who felt “to have won”, according to their coach Christophe Galtier, nor the Marseillais, whose coach, Jorge Sampaoli, rejected the fouls on the opponent.

The Gym remains the most sanctioned club: with two withdrawal points, one suspended, the Aiglons will drag the ball of this nightmare evening all season.

This decision recalls the one that hit Metz in January 2017, for the firecrackers that hit Lyon goalkeeper Anthony Lopes, causing the game to stop.

The Moselle formation had been punished by a withdrawal of two points … turned into three points suspended after appeal.

OGC Nice can appeal to the Higher Appeal Commission of the French Football Federation (FFF). The appeal is not suspensive, except for exceptions.

The Niçois will finally have to play three home games behind closed doors, the first having been purged before the international break against Bordeaux, as a conservatory.

The second will be the one against OM, to be replayed, and the third… the derby against neighboring Monaco, on September 19.

On the sporting front, OM, which is considering a possible appeal, deplores the suspension of two of its players : the playmaker Dimitri Payet (one match suspended) and the Spanish defender Alvaro Gonzalez (two matches closed).

“We are extremely shocked by the sanctions that have been taken against Alvaro and even Payet,” said in the evening to AFP the club’s director of communication, Jacques Cardoze. “We have the impression that we needed a scapegoat on the OM side and that it was he who took. It is violence that must be condemned, not the actors of the game, ” he added.

“Despite the circumstances of this match, their behavior appeared to us as sanctionable, given that they participated, in a limited but real way, in the hotbeds of tension,” explained Sébastien Deneux.

“For Payet, the penalty takes into account the fact that he was directly hit by a bottle and then hit by a kick from a spectator, which was not the case for Alvaro,” he continued.

A “proportionate” penalty for the Minister

For the Minister delegate in charge of Sports, Roxana Maracineanu, the sanctions taken by the disciplinary commission are on the contrary “proportionate”. The Minister also called for a reflection on an “expanded” sanctions panel.

“I am glad that there were sanctions proportionate to what happened. The first victims were the players and this is unacceptable, ” she said in Marseille, on the occasion of a visit to the French Sailing Pole of Roucas-Blanc, where the Olympic sailing events will be held in 2024.

“The sanction that was pronounced, I do not have to comment on it, it was taken by an independent institution. I am nevertheless happy that she took into account the chronology of the events and I repeat what I said at the time of the events: this violence is unacceptable in a stadium, especially on the actors of the game. This violence has crossed the line, ” added the Minister.

Suites to be expected

The match between Nice and Marseille escalated in the 75e minute after Payet, who was about to shoot a corner, was the target of the ultra-Nice fans. Hit on the back by a plastic water bottle, the Réunion man returned the projectile to the public.

Dozens of Nice fans then invaded the pitch, causing a general brawl between fans, players of both teams and members of the management of the two clubs. Alvaro Gonzalez notably sent a ball into the stand.

The physical trainer of OM Pablo Fernandez meanwhile put a punch to a Nice supporter entered the lawn. He was suspended until the end of the season.

The aftermath of this controversial match will not end there. Several judicial investigations are ongoing.

The Nice supporter author of a kick in the direction of Payet, now under judicial supervision, will be tried on September 22.

Another, accused of making a Nazi salute, was remanded in custody Friday pending his trial set for October 13, for “apologizing for crime against humanity”.