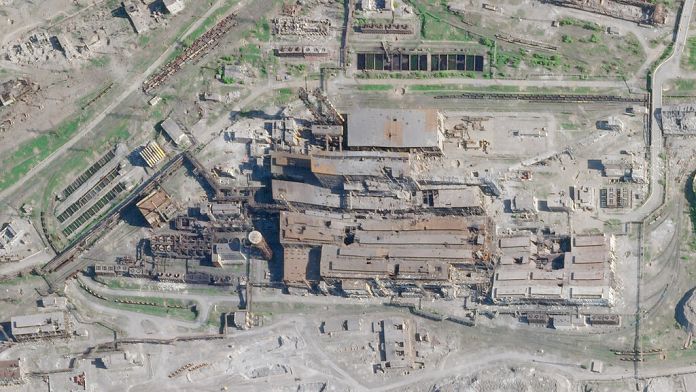 Ukrainian authorities plan further evacuations of residents of Mariupol on Monday, after an initial operation that removed around 100 civilians from the factory Azovstalbesieged by Russian forces in this strategic port in southeasternUkraine.

“On May 2, the evacuation in Mariupol begins at 7:00 a.m. Collection point – Port City shopping center”announced on Telegram Pavlo Kirilenkoregional governor of Donetsk, on the night of Sunday to Monday.

The evacuation operation began on Saturday and was carried out in coordination between theUkrainethe Russia and the International Committee of the Red Cross (ICRC).

It first concerned civilians present in the basements of the huge Azovstal steelworks.

“Today, for the first time since the beginning of the war, this vital humanitarian corridor has started to function. For the first time, there have been two days of real ceasefire in this territory” of the steel complex, the Ukrainian President said on Sunday evening Volodymyr Zelensky in a video message. “At last !”

“More than a hundred civilians have already been evacuated, first of all women and children”said the president, adding that the first evacuees would arrive in Zaporizhiaa town west of MariupolMonday morning.

Mr. Zelensky added “hope that the conditions will be met to continue evacuations from Mariupol”.

Ukrainian Deputy Prime Minister Iryna Vereshchukhowever, recalled that “hundreds of civilians remain stranded in Azovstal” alongside the Ukrainian soldiers who are still resisting under the Russian bombs.

“The situation has become a sign of a real humanitarian disaster because people are running out of water, food and medicine”she warned.

The bombardments would have resumed

Especially since the Russian bombardments seemed to resume, according to Denis Schlegacommander of the 12th Operational Brigade of the National Guard of Ukraine.

“For the last two days, during the operation to get civilians out of the factory, there was an announcement of a ceasefire (…) two days of calm, but once the last civilian left the factory, which literally happened an hour ago, the bombardment of the factory started again with all kinds of weapons”he said in the wake of the evacuation in a video broadcast on Ukrainian television.

Thousands of civilians had been able to leave since the start of the war on February 24 Mariupol, a port city populated before the war by half a million inhabitants and now under Russian control after weeks of bombardments which have almost entirely destroyed it. destroyed and left at least 20,000 dead, according to the Ukrainians.

But this is the first time, after multiple failed attempts despite the intercession of foreign officials and Pope Francis, that civilians entrenched in the Azovstal complex, the last pocket of Ukrainian resistance crushed by Russian bombs, have been able to to go out.

New satellite images from Maxar Technologies taken on April 29 showed almost all of the buildings in the huge steel complex had been destroyed by the bombings. Ukrainian soldiers and civilians hide in the many underground galleries dating from the Soviet era, attacked according to Kyiv (kyiv in Russian) with very powerful armor-piercing bombs.

Ukraine: update on the situation after nine days of war