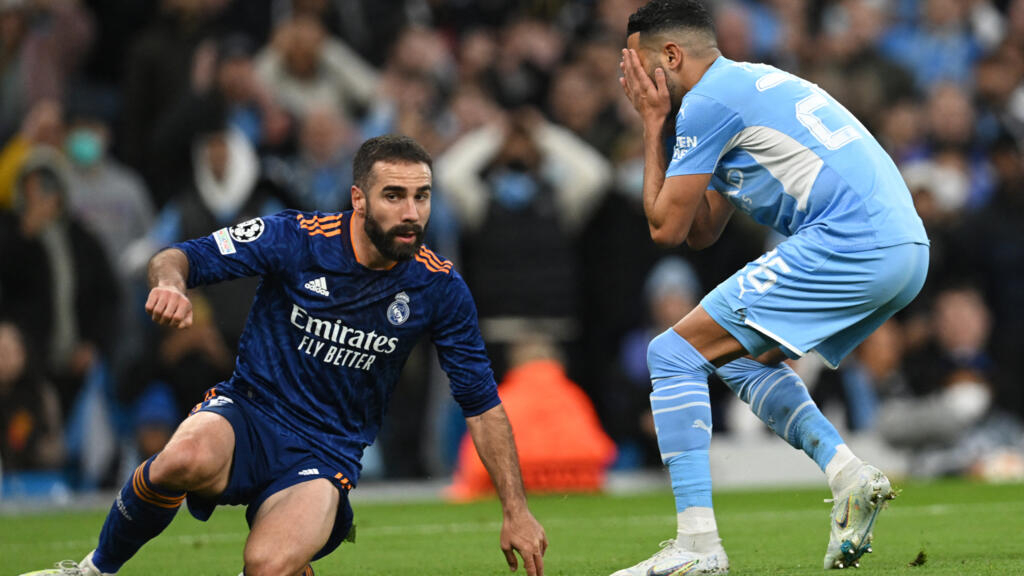 Manchester City won their first leg semi-final against Real Madrid on Tuesday after a match of rare intensity (4-3).

Seven goals! The first semi-final of the Champions League, vintage 2022, has kept all its promises. At the Etihad Stadium, Manchester City and Real Madrid had a spectacular match, going blow for blow. Upon arrival, the Citizens took a short advantage for the return match (4-3). Karim Benzema distinguished himself with a double.

Manchester City did not bother with an observation round. Riyad Mahrez turns on the right side and sends a millimeter cross for Kevin De Bruyne launched at full speed. The Belgian’s diving header hit the mark (1D1-0).

Real Madrid try to react immediately. Ederson misses his raise as Karim Benzema puts the pressure on. He relies on Rodrygo, who is taken over by the Mancunian defense (6and). It is still him who stumbles on Aymeric Laporte a few moments later (10and).

On the left side, Foden gets the better of Militao and slips back to Kevin De Bruyne. The Belgian’s cross towards Gabriel Jesus is perfect. The Brazilian turns around with a technical gesture to dodge Alaba and deceives Courtois (11and2-0).

Madrid captain Karim Benzema sounds the revolt. He leads by example by pressing. On recovery, he shifts Vinicius Junior. He enters on the left before opening his right foot to strike (17and).

Despite the awakening of the White House, Manchester City does not give up. Madrid side Daniel Carvajal has a very complicated match against Phil Foden. On a counter, Bernardo Silva accelerates and opens on the right towards Riyad Mahrez. The Algerian forgets to serve Kevin De Bruyne and strikes with the right foot – small net (26and). Pep Guardiola is not angry with this wasted opportunity despite the stranglehold of his men.

It must be said that he knows he has a world-class striker in front of him. Ferland Mendy sends a cross for his captain Benzema, who deflects from the left in the goal of Ederson (33and, 2-1). Despite the battering of Manchester City, the two teams return to the locker room on this score.

The match starts as strong as the first half. Militao is completely holed up, Mahrez takes advantage of it and finds the post with a curl from the left. The ball comes back to Foden who takes a volley… Carvajal saves while the goalkeeper was beaten (46and). On the other hand, his next attempt is a hit. Fernandinho recovers the ball and combines with Bernardo Silva before sending a millimeter cross to the young Mancunian prodigy, who crosses his head (53and3-2).

Real Madrid’s response is not long in coming. In the continuity of the engagement, Vinicius eliminates Fernandinho on the sideline, accelerates into the area and deceives Ederson in a tight angle (55and3-2).

In a match of very high level, the two teams go blow for blow with great intensity. Manchester City and Real Madrid do not save themselves. After a very long possession of the Citizens, Zinchenko was mowed down at the entrance to the surface by Toni Kroos. The referee hesitates but leaves the advantage. All the players stop except Bérnardo Silva, who sends a missile into the top corner of Courtois (73and4-2).

But the incredible storyline continues. On a free kick obtained by the incoming Camavinga, Kroos sends a cross to Benzema. Laporte is guilty of a hand and a fault on “KB9”. And the Madrid captain does not hesitate to transform him with an insolent panenka (82and4-3).

Despite the last attempts of the “Citizens”, the score remains there. Fans of both teams can’t wait: to be in the return match, scheduled for Wednesday, May 4.