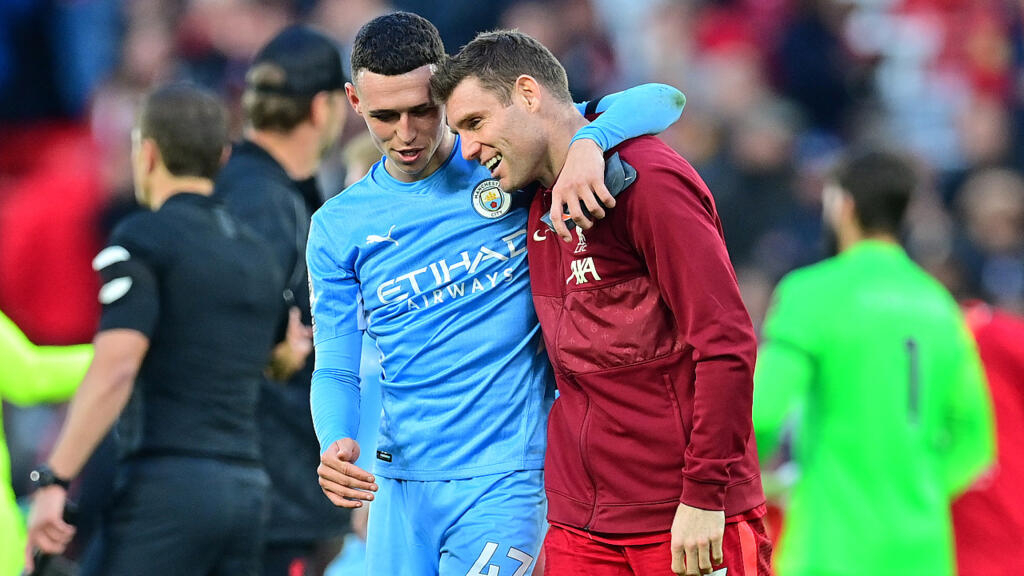 Already neck and neck in the Premier League, Manchester City and Liverpool are aiming for no less than the continental title. Respectively opposed to Atlético Madrid and Benfica Lisbon, Tuesday, in the quarter-finals of the Champions League, the two English giants face, in appearance, two opponents within their reach.

In the Premier League, they are only separated by a dot, launched in a panting mano a mano. Manchester City and Liverpool will put their rivalry on hold while they focus on their European ambitions. The first legs of the quarter-finals of the Champions League of the two English giants are played on Tuesday April 5, respectively against Atlético Madrid and Benfica Lisbon.

Manchester City, leaders of the English championship, will indeed welcome the Spanish defending champion, currently third in La Liga, in one of the main posters of this new round of the C1.

Football fans are impatiently awaiting the tactical duel between coaches Pep Guardiola and Diego Simeone, the Citizen apostle of the “beautiful game” turned towards attack and the Colchonero follower of pragmatic football.

According to observers, the first leg, played at the Etihad Stadium, however risks being padlocked, or boiling down to endless attack-defense sequences, opposing an exclusively English possession to an airtight and disciplined Madrid block.

However, beware of scripts written in advance. Because if Manchester City can count on Kevin De Bruyne, Raheem Sterling, Bernardo Silva or Riyad Mahrez to animate the match and make the Spanish rearguard dizzy, Atlético also has offensive arguments with Antoine Griezmannthe young Joao Félix and the stainless Luis Suarez, all capable of blasting through any defense.

“Having seen them play, there are false ideas about the way they play,” said Pep Guardiola on Monday at a press conference. “They are more attacking than people think. They don’t take risks in the build-up, but they have a lot of quality in the final third [du terrain].”

Even if he must fear the offensive waves of the Citizens, Diego Simeone surely keeps in mind that the only time that the two coaches have faced each other on the European stage, in the semi-finals of the Champions League in May 2016, this are his Colchoneros who had managed to reach the final. Then in charge of Bayern Munich, Pep Guardiola was eliminated despite total domination of the Bavarians in the second leg, with a possession of 68% and 34 shots, including 12 on target, thanks to the away goal scored by Antoine Griezmann . A rule that was abolished this year.

“We will have to manage a lot of crosses, their counter-attacks, and try to put a lot of players in the box”, explained Diego Simeone, in a press conference. “We will try to take the game where we want to hurt them with the way we have played for several years.”

If there is therefore a risk of witnessing an opposition of styles on the Manchester side, Liverpool, ultra-favorite in their quarter against Benfica, has an appointment with an unpredictable opponent, moribund on the national level but effective in C1.

Thwarting all predictions in the previous round, which saw them eliminate Ajax Amsterdam (2-2, 0-1), the Lisbon club is indeed the surprise guest of the quarter-finals of the Champions League, which he is back for the first time since the 2015-2016 season.

However, Benfica, which has not won a national title since 2019, is having a fairly lackluster season compared to its standing and the expectations of its supporters, even though it has Uruguayan striker Darwin Nuñez in its ranks, capable at any time with a bang.

Third in the championship, 15 points from FC Porto who also eliminated them in the round of 16 of the Portuguese Cup, beaten by Sporting, the Lisbon rival, in the final of the League Cup, the “Eagles” are heading all straight to a new pristine season.

To make matters worse, the club is in total limbo with regard to its management. His current coach, Nelson Verissimo, has only had interim status since he replaced the charismatic Jorge Jesus at the end of December, who left his post due to poor results and a stir in the locker room. According to the Portuguese press, Nelson Verissimo will be replaced at the end of the season.

It is therefore in this context, apparently very favorable and perhaps even conducive to overconfidence, that the steamroller shaped by Jürgen Klopp will present himself at the Estadio da Luz.

Inter Milan fallers in the round of 16, the “Reds” will still have to “be at (their) maximum” on Tuesday if they want to join the last four of the C1 and avoid a possible Lisbon trap, warned coach Jürgen Klopp.

“To be at our maximum is the project for all matches,” said the German technician during the press conference the day before the match. “Benfica are one of the teams that have won the most titles in Portugal, although they are not where they would like to be in the table, but they have had a good run in the Champions League.”

A warning that Liverpool will have in mind at the start of this first leg, for which Jürgen Klopp can count on his entire workforce, including his two African stars Sadio Mané and Mohamed Salah.

Abdoulaye Sarr: “Our goal is to train the young nuggets who will make the football of tomorrow”

“The sports authorities have taken their responsibilities by excluding Russia”