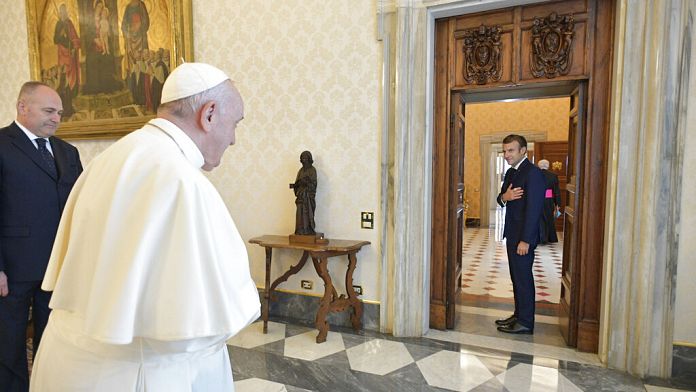 Emmanuel Macron was received at the Vatican on Friday by Pope Francis for the second time in his five-year term, a gesture towards Catholics five months before the presidential election and in the wake of the sexual abuse scandal that shook the Church of France.

He was then received by Cardinal Pietro Parolin, Vatican number two, and Bishop Paul Richard Gallagher, Secretary for Relations with States.

According to diplomatic sources, these talks were to be an opportunity to address the migration crises at the gates of Europe, after the shipwreck that claimed the lives of 27 migrants on Wednesday in the Channel, and the Sauvé report on sexual abuse in the Church in France, on which the Pope has already expressed his “immense sadness” and a feeling of “shame”.

No word, however, on this matter in the official Vatican press release: “the discussion focused on a number of international issues, including the protection of the environment in the light of the results of the COP26”, “the perspectives of the next presidency of the European Union “, as well as on” France’s commitment to Lebanon, the Middle East and Africa “.

On images broadcast by the Vatican, the two heads of state appear smiling and talk to each other in a warm atmosphere. The president offered the sovereign pontiff two biographies of Ignatius de Loyola, founder of the Jesuit order from which the Argentine pope came: a first, rare, from 1585 and a second work, “Inigo”, by François Sureau, member of the French Academy.

In return, the Pope offered him a ceramic painting depicting St. Peter’s Basilica and papal texts.

“Talking with the Pope, coming to discuss several international issues was extremely important,” Macron said at a press conference.

The French president returned to the management of the migration crisis, exposing his vision of “humanism, but with rules” and the need “to have cooperation policies with countries of origin and transit to avoid these movements undergone “.

Thursday, he had already explained his differences with the Pope on the subject of migrants. “We must welcome, it is constitutional asylum (…) On the other hand, welcoming everyone is not sustainable for the balance of our countries,” he told the newspaper La Croix.

Through this visit to the Vatican, a month after that of his Prime Minister Jean Castex, Emmanuel Macron spares a Catholic electorate with whom relations have been cooled by the adoption of the bioethics law as well as the restrictions on access to funerals and the holding of masses during the health crisis.

The reminder of the law concerning the secrecy of confession has also been a bone of contention.

And another tension could arise if he included in the program of a second five-year term the right to die, as some of his relatives wish.

Emmanuel Macron’s visit to the Vatican is a mark of respect in a relationship that has been a roller coaster. In April 2018, in front of the bishops meeting in the College of Bernardins, in Paris, Emmanuel Macron said he wanted to “repair the link between the Church and the State” which “has been damaged”. He was also the first president to visit Lourdes in July.

But he also declared, with regard to the law on assisted reproduction, that the voice of the Church on matters of society “cannot be injunctive”.

Another goal of his trip is the signing of the Quirinal Treaty, concluded between France and Italy, which emphasizes strengthening cooperation between the two countries in the defense and security sector.

This treaty encompasses other common subjects, such as culture and education, common engagement in the Mediterranean and Africa as well as cooperation in the field of space, the Italian government said. The opportunity to strengthen ties with an ally one month before the start of the French presidency of the EU.