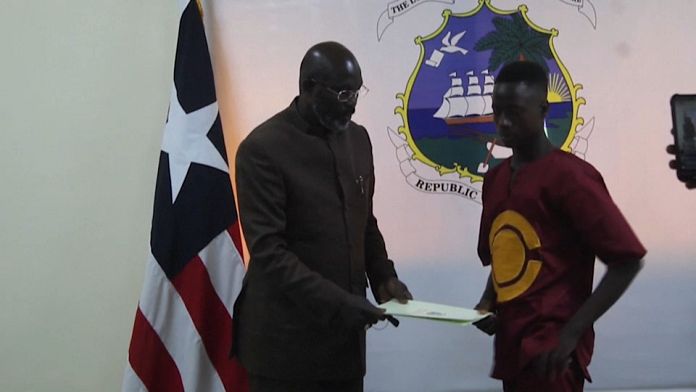 A Liberian teenager who picked up US$50,000 and then returned the money to his owner has been named the impoverished West African country’s “integrity ambassador” and rewarded with a monthly salary by President George Weah.

The story of Emmanuel Tuloe, who drives a motorcycle taxi for a living, has received widespread media coverage for his civic act in Liberia, where nearly half the population lives in extreme poverty.

He fell on October 10 in the north-east of the country on a plastic bag filled with money totaling $ 50,000 while on a motorcycle, he told AFP on Friday.

To the surprise of his friends, the 19-year-old returned the money to his owner, a businesswoman, after hearing her the next day launch a message on the radio.

“My friends were telling me that I am very stupid and that I will never get rich in my life,” Mr. Tuloe said. “My parents did not teach me to fly, so I decided to return the money that does not belong to me”.

Liberia’s president, former soccer star George Weah, invited Emmanuel Tuloe to an audience at the presidential Palace earlier this week in Monrovia, offering him a $10,000 reward for his honesty.

Mr. Weah, 55, also offered the teenager a scholarship to master’s level, appointed him “integrity ambassador” for Liberia and awarded him a monthly salary of $500.

“I don’t think I will be poor as my friends predicted,” Tuloe told AFP, explaining that his dream is to become a doctor or nurse. “I encourage all my friends not to take what does not belong to them,” he said.

The country also suffers from high inflation and frequent cash shortages. According to the World Bank, 44% of the Liberian population lives on less than $1.9 a day.

United States: opening of new secret archives on the assassination of Kennedy