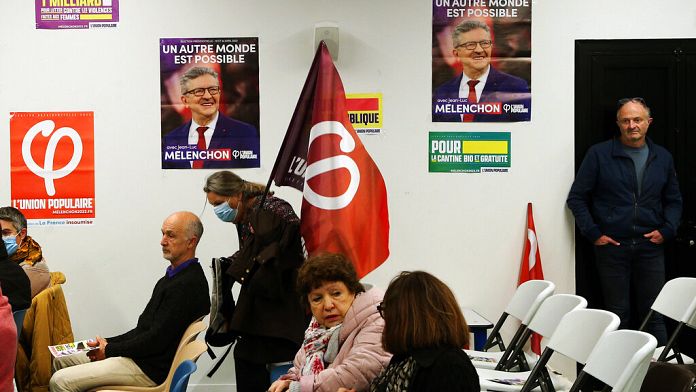 “No insurmountable points“: the historic negotiations between La France insoumise and the Socialist Party started on Wednesday with a “positive” meeting according to the protagonistscontrasting with the strategic and substantive tensions that continue to disrupt discussions between rebels and environmentalists.

“We did not have the impression of discussing with the same PS as two, three years ago“, reported to the press the chief negotiator of LFI Manuel Bompard, who has also started other bilateral discussions for more than a week with EELV, the PCF and the NPA.

LFI displays its ambition to obtain the function of Prime Minister for Jean-Luc Mélenchon by a victory in the legislative elections of June 12 and 19, after his solid third place in the presidential election (21.95%).

Manuel Bompard felt that there was “no point of discussion which seemed insurmountable” with the PS, after years of deep fracture fueled by an offensive presidential campaign by Anne Hidalgo against Mr. Mélenchon.

“There is clearly a desire to display a break with the PS of François Hollande, they had no difficulty in committing to the repeal of the El Khomri law, on the Sixth Republic, the price freeze, which are important markers for us“, rejoiced the MEP LFI.

PS spokesman Pierre Jouvet for his part declared to have “had a constructive discussion which allowed us to move forward on certain points, there is no insurmountable sticking point between us“with a view to an agreement.

The two formations will “continue to discuss in the hours that follow”, he said.

“We are now awaiting a public declaration from the PS which allows us to record these points of convergence, we will see if in the next few days it takes place and in this case we can continue to discuss“warned Manuel Bompard.

Considering an agreement with the party of Jean-Luc Mélenchon is a major turning point for the Socialists. Under duress because with 1.7% of the presidential vote, the PS is threatened with extinction.

Since the vote by its National Council, eight days ago, of a desire to discuss with LFI for the legislative elections of June 12 and 19, the PS has been in the grip of tensions. Tuesday evening, First Secretary Olivier Faure, criticized during a national office by the minority current of the party, invited those who think “there is nothing more to do” to leave.

Among those who oppose this merger, the head of this current Hélène Geoffroy, the mayor of Le Mans Stéphane Le Foll or the former first secretary Jean-Christophe Cambadélis.

These are other types of tension that have slowed down discussions between LFI and EELV since the start of the week. Greens leader Julien Bayou points out: “The task is not easy: we seek to do in a few weeks what we were unable or unwilling to build in five years. Inevitably, it gets a little stuck.”

In question, the nature of the partnership: Popular Union in the continuity of Jean-Luc Mélenchon’s campaign, or “coalition” requested by environmentalists? MP LFI Clémentine Autain spoke of “federation” to reassure them. The relationship with Europe is also a bone of contention.

LFI regretted, Wednesday in a press release, that “for 48 hours, several leaders of EELV have publicly reconsidered the important programmatic commitments“already caught up in the negotiations: retirement at 60, freezing of fuel prices and application of the principle of disobedience in Europe “when it is essential to apply our program”.

Manuel Bompard in particular questioned “what Yannick Jadot said” Tuesday on France inter. The ex-ecologist candidate had estimated that an agreement behind Jean-Luc Mélenchon in chief “would not work”, and opposed “civil disobedience to the EU treaties”.

Left-wing member Alain Coulombel, who has often been critical of the leadership’s attitude, told AFP that the party was united in judging that “the current conditions are not satisfactory”, for example on the distribution of winnable constituencies.