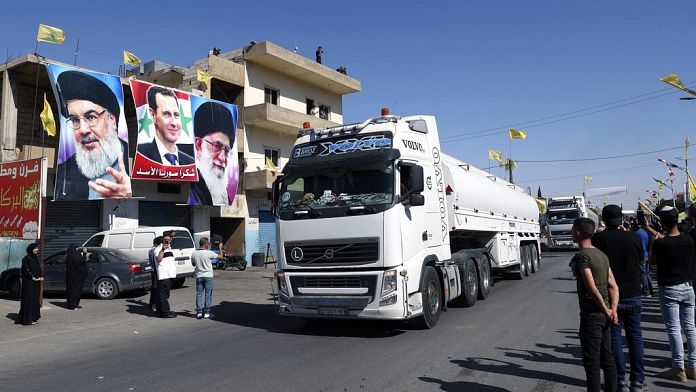 Dozens of tanker trucks carrying Iranian fuel oil and transported by Hezbollah arrived on Wednesday morning from Syria to Lebanon, plagued by severe fuel shortages, according to an AFP correspondent.

In August, the leader of the pro-Iran Shiite movement, Hassan Nasrallah, announced the departure of a first Iranian ship loaded with fuel destined for Lebanon, promising that more would follow, as the Lebanese state, bankrupt and short of foreign currency, struggles to import.

A first convoy of 20 tankers, bearing Syrian license plates entered Lebanese territory Wednesday morning via an illegal crossing in the Hermel region (east), said the AFP correspondent on the spot.

Arriving from Syria where the Iranian ship unloaded its cargo at the port of Banias, the tankers were greeted in jubilation by pro-Iranian party supporters stationed along the road leading from Hermel to Baalbeck, two Hezbollah strongholds.

On both sides of the road, women threw yuyus as well as rice and rose petals while men waved Shi’ite party flags.

A total of 80 tanker trucks, with a total capacity of four million liters, were scheduled to arrive in Lebanon on Thursday.

They will unload their cargoes in Baalbeck in the tanks of Amana gas stations, held by Hezbollah and targeted since February 2020 by US sanctions, before being distributed to the market, in order of priorities.

“It is humanitarian aid that meets the needs of the population and the producers of bread, flour and basic necessities,” says Jawad, 50, a resident of Hermel.

Hezbollah “will not take the place of the state, it is a temporary measure until the State can assume its functions”, he adds, referring to the criticism launched by Lebanese at the address of the party, accusing it of establishing a state within the State and exposing Lebanon to the risk of economic sanctions.

A sworn enemy of the United States and Israel and targeted by sanctions, Hezbollah is a heavy weight in Lebanese politics.

Since autumn 2019, Lebanon has been living at the pace of an unprecedented crisis, described by the World Bank as one of the worst in the world since 1850, having seen its national currency lose more than 90% of its value against the dollar.

For months, endless queues have formed in front of gas stations.

The arrival of Iranian fuel comes a few hours before the new government’s planned adoption of its action plan, after Friday’s establishment of a ministerial team after 13 months of a vacuum that aggravated the crisis.