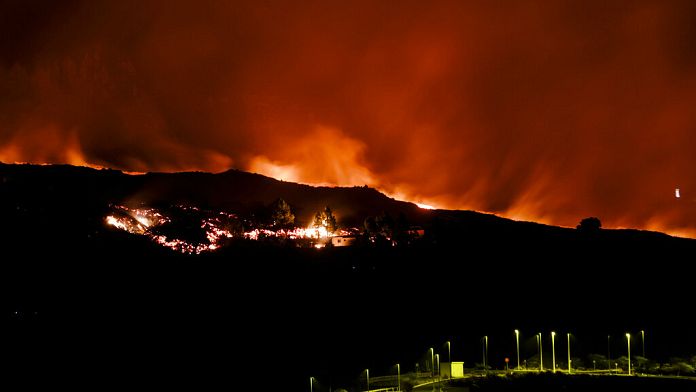 The Cumbre Vieja does not fade. After almost 3 weeks of eruption, the volcano on the island of La Palma in the Canary Islands continues to release smoke and lava continuously, and the situation does not seem ready to improve.

According to Spanish media, part of the cone collapsed this Saturday morning, causing a new lava flow to the north of the crater. A casting that would “generate enormous destruction in its wake” according to the volcanic Institute of the Canaries, quoted by the newspaper El Mundo.

La Palma airport, which had closed on Thursday, was able to reopen on Saturday morning. “La Palma airport is operational again,” assured the Spanish airport authority AENA in a tweet, adding that cleaning was continuing and without specifying when flights would resume.

For its part, the regional company Binter “analyzes” the situation and hopes to resume its flights “in the next few hours”, said a spokeswoman to AFP.

According to the Spanish channel Antena 3, 1,149 buildings and infrastructure were destroyed by the volcano, and 500 hectares of the island were covered by lava, which reached the Atlantic Ocean.

In particular, the lava caused great damage to banana plantations, the main activity, along with tourism, of this small island of the Canary Archipelago, located west of the coast of Morocco.

“Recent lava flows have mainly damaged agricultural areas, 120 hectares of crops in total, half of which are banana plantations“, said Friday the Volcanic Emergency Plan of the Canary Islands (Pevolca).

Dozens of new low-magnitude earthquakes, up to 4.3 on the Richter scale, have also been recorded in recent days, IGN said on Twitter.

The eruption has so far caused no casualties, but nearly 6,000 people have been forced to leave their homes, out of the island’s 85,000 inhabitants.

Antony Blinken: “In case of Russian aggression in Ukraine, we will respond”