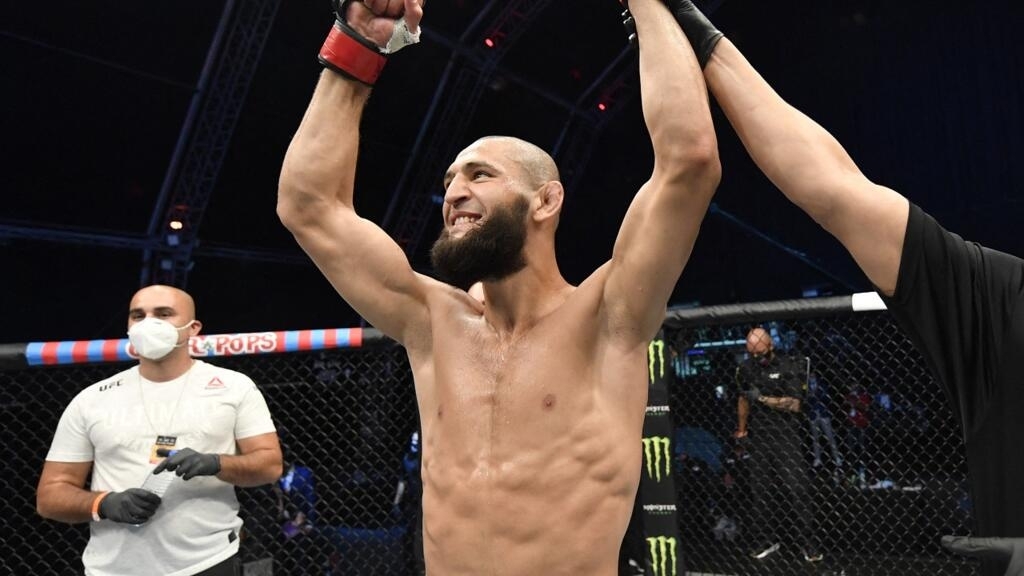 In four fights in the UFC, Khamzat Chimaev has become the attraction of the most important mixed martial arts league. The undefeated Swede crushed all his opponents with disconcerting ease. The prodigy challenges the formidable Gilbert Burns on Saturday and is already eyeing the welterweight throne, occupied by Kamaru Usman.

Khamzat Chimaev’s last appearance in the octagon was a gem of perfection. It was October 30, 2021, in Abu Dhabi, against Li Jingliang, 11and in the welterweight ranking. He needed only ten seconds to grab his opponent head-on and shake him like a plum tree, then address Ultimate Fighting Championship (UFC) boss Dana White, seated on the edge of the cage.

While torturing Jingliang to the ground, Chimaev shouted at White, “Dana! Dana! Dana! I’ll take anyone! I’m the king!”

“He played with him like with a child,” comments Alexandre Herbinet, journalist and presenter of the RMC Fighter Club podcast. Moments later, Khamzat Chimaev put an end to the Chinese ordeal by beating him by submission, with a perfect chokehold. A fourth consecutive demonstration at the UFC for the phenomenon.

Saturday, April 9, the main event of the UFC 273 meeting in Jacksonville (Florida) will pit Alexander Volkanovski, featherweight champion, against “Korean Zombie” Jung Chan-Sung. An enticing poster but yet overshadowed by that between Gilbert Burns and Khamzat Chimaev.

The return of the Swede to harelip – stigma of a fall when he was little – is eagerly awaited after his previous spectacular performances. Khamzat Chimaev, born in Chechnya in 1994 and immigrated to Sweden in 2013 where he was naturalized, is a fusion of what works best in MMA: an extraordinary talent and a big mouth to add spice.

Illustration on July 16, 2020 during his first fight in the UFC. Khamzat Chimaev, a pure product of the Chechen wrestling school, sweeps away John Phillips in two rounds. “I want to fight next week, no matter when. I’m too hungry. Give me anyone and I’ll destroy them like today”, proclaims the winner in stride, without losing his smile.

Ten days later, the one nicknamed “Borz” (“Wolf” in Russian) imposes daunting pressure on Rhys McKee and wins by technical knockout in just three minutes. “I smash everyone. Give me the champions under 84 kilos and under 77 kilos, I beat them the same day”, he still launches in his post-fight interview.

The wrestling specialist then demonstrated the full power of his punch in his third UFC fight on September 19, 2020: his opponent, Gerald Meerschaert, was knocked out in 17 seconds, with a single punch. Thirteen months later, Chimaev will ridicule Jingliang.

The numbers are hard to believe: 10 wins and no losses in career, less than 13 minutes of fight in four confrontations in the UFC, and 254 blows for only 2 cashed on these four outings. A real steamroller that “works on everyone”, summarizes Alexandre Herbinet.

A Stakhanovite survivor of Covid-19

With his origins and his exemplary struggle, Khamzat Chimaev is often compared to Khabib Nurmagomedov, the invincible Russian now retired (29 wins, no losses). The parallel is tempting, but he nevertheless has this little trick that his eldest did not have: this taste for provocation, for the little phrase that will increase the pressure and attract the spectators. MMA is also a discipline where the show is important.

“You don’t become a star in the UFC if you’re not super dominant in the cage and/or if you’re not a loudmouth. But to be a true superstar, you need both. That was the case of all big like Brock LesnarRonda Rousey in his heyday, Conor McGregor… They had the charisma that went with the performances”, explains Alexandre Herbinet. “Borz” follows the same path, hence its enormous popularity.

Khamzat Chimaev only lives for the fight. At the Allstar Training Center in Stockholm, where he trains, “all the guys who meet him describe him as a crazy Stakhanovist: he doesn’t take a break, he doesn’t have a day off, he’s there all the time and he always trains at high intensity”, develops the RMC journalist. A devotion close to obsession which turned against him.

At the end of 2020, Borz’s ascent came to a halt when he contracted Covid-19. Hard hit, Chimaev still continued to train, worsening his condition. Very diminished, demoralized, he announced his retirement in March 2021 before changing his mind. The support of his great friend, the controversial Chechen leader Ramzan Kadyrov, was there for many. His comeback fight against Li Jingliang proved he hadn’t changed.

Eleventh in the UFC welterweight rankings, Chimaev has a golden opportunity with this fight against Gilbert Burns, No. 2 in the category behind champion Kamaru Usman and No. 1 Colby Covington. The Brazilian is one hell of a customer. It represents the Swede’s first real test. A defeat would shatter all the passion aroused over the past two years.

Dana White, he has a plan: if Gilbert Burns is crunched in turn by Chimaev, nothing will oppose a fight of the latter for the belt. This is what everyone in MMA is waiting for: a fight between Khamzat Chimaev, the young wolf with a fierce appetite, and the predator at the top of the food chain, Kamaru Usman.

The Nigerian has been crushing the welterweight category for more than three years now. The champion defended his title five times. Colby Covington, the most serious contender? Beaten twice. Jorge Masvidal? Same price, with the best knockout of 2021 as a bonus. Gilbert Burns? Carried away by “The Nigerian nightmare” (“The Nigerian Nightmare”) despite a good resistance. Kamaru Usman dominates unchallenged and occupies the place of No. 1 in all categories.

Saturday’s fight will therefore serve, for “Borz”, as an examination and an antechamber towards a chance for the title. Alexandre Herbinet sees an “inevitable side” in this watermark duel: “If Chimaev dominates Burns, two ultra-dominant guys would meet for the belt. If he beats Burns on Saturday, Usman-Chimaev would be by far the biggest fight of the year “And arguably the biggest fight in a very long time. The pay-per-view would sell really well. Much more than Ngnannou-Gane, which was an expected fight.”

Khamzat Chimaev has never hidden that he is targeting Kamaru Usman, and even Israel Adesanya, the other Nigerian who reigns at middleweight. Before that, he must clear the Gilbert Burns obstacle. Which, to listen to him, will only be a formality. “I’m going to smash him and knock him out in a minute, guys, I promise you that,” he said as he looked on two days out.

Basketball – NBA: LeBron James, Carmelo Anthony… The confession of Russell Westbrook on his arrival at the Lakers!

Rwanda to host world Cycling championships in 2025, a first for Africa

2022 – Africa zone: follow live all the results of the first round matches of the 3rd round