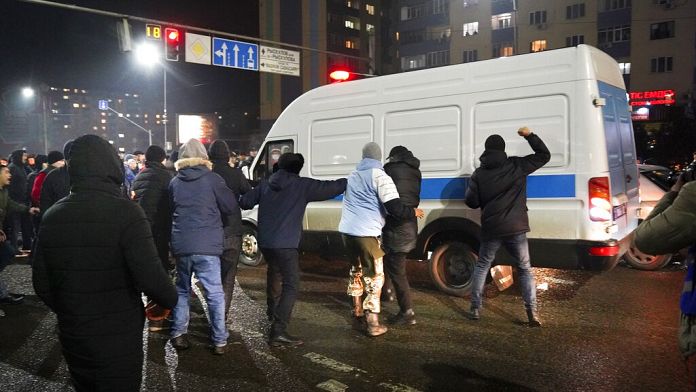 The Kazakh opponent Mukhtar Abliazov, a political refugee in France, told AFP on Thursday that a “revolution” was on the march in his country and denounced “the occupation” of Kazakhstan by Russian forces, called to the rescue by the authorities in place.

“In literally three days, a revolution has occurred. It’s a real revolution”, he said during an interview in Paris, where he lives.

“The regime change has not yet taken place but the revolution has already taken place in people’s minds”, considers the ex-banker and ex-minister of 58 years who fell out of favor in his country at the end of the 1990s.

“I consider it the end of the diet, the question is only how long will it take”, he said. “It can last a year but everything can also change in two weeks”, he sketches.

The former Soviet republic, the largest country in Central Asia, is shaken by a protest that erupted in the west on Sunday after a rise in gas prices before reaching Almaty, the economic capital, where protests have turned to riot against power.

Authorities on Thursday reported “tens” protesters killed and more than a thousand injured.

Under pressure from the streets, the president Kassym-Jomart Tokayev sacked the government and conceded a drop in gas prices.

For Mukhtar Abliazov, after three decades of authoritarian rule, “people have understood that they are not weak, that they can force the regime to listen to the people”.

“They started to bring down the statues of Nursultan Nazarbayev”, the former president who retains great influence after ruling the country from 1989 to 2019, he said.

According to him, the ex-president, considered as the mentor of the current head of state, took refuge in Abu Dhabi after the start of the riots. This information was not immediately independently verifiable.

“People now see that if they unite they can topple statues, bring down the government”, he assures.

The Kazakh president also asked for help from the Collective Security Treaty Organization (CTSC), a military alliance that unites several former Soviet republics around the Russia. Russian troops arrived in Kazakhstan on Thursday to support the ruling power.

For the opponent, the power “was afraid and asked for help from Putin who wants to rebuild the former Soviet Union (…) and took advantage of the situation” to intervene militarily.

“For us it’s an occupation”, he hammered, calling on the Kazakhs to “organize strikes and block the roads”.

The opponent himself intends to continue his fight from Paris – where he created an opposition party, the Democratic choice of Kazakhstan – while waiting to be able to return to his country, and will ask to meet French President Emmanuel Macron.

He says he is ready to become Prime Minister of a provisional government and promises the establishment of a parliamentary regime, without a president.

“I always say that I will lead the temporary government that will overthrow Nursultan Nazarbayev for six months”, he observes.

Former minister of President Nazarbayev, Moukhtar Abliazov spent 14 months in Kazakh prisons after his disgrace, before going into exile in the United Kingdom and then in France.

He is accused of embezzling billions of dollars when he ran BTA bank, accusations he has consistently denied.

Kazakhstan also lodged a complaint against him in France, where he was indicted but also obtained refugee status, the National Court of Asylum (CNDA) considering that the charges against him have a “political motive”.

In 2017, the former oligarch was sentenced in Kazakhstan in his absence to twenty years in prison in this case of embezzlement. Then to life imprisonment the following year for having ordered the murder of a business associate in 2004, when the initial investigation had found a hunting accident.

Floods in Greece: 20 million euros pledged for the island of Evia