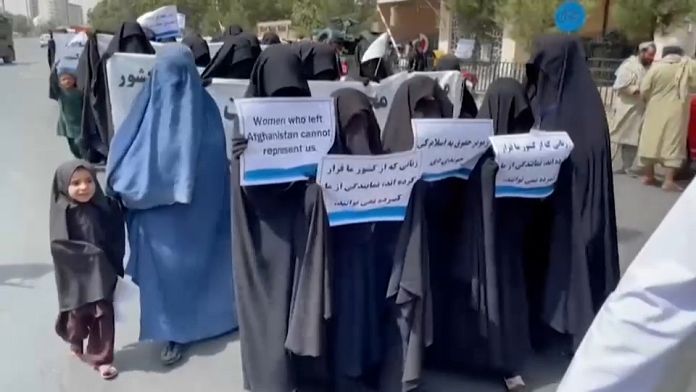 Several hundred fully veiled Afghan women gathered Saturday (September 11th) in the amphitheater of a Kabul university to express their support for the new Taliban regime whose policy towards women is causing concern at home and abroad.

These some 300 womenthe majority of them wore black niqabs covering their entire face except the eyes, waved the flags of the new masters of Afghanistan as they listened to the speakers who came to defend the measures of the new regime.

A handful of them had donned the burqa, a full-face veil with a grille at eye level that was mandatory under the first Taliban regime (1996-2001) and many women wore black gloves, AFP journalists said.

The Taliban, who returned to power on August 15 last 20 years after being ousted, are expected to turn around, especially on the issue of women’s rights.

The people and the international community remember the strict application of Sharia, Islamic law, during their first time in power. Women were then not allowed to study or work.

Since August 15, the Islamist movement promised that their rights would be respected and announced that they could study at university, provided that they wore an abaya and niqab and that classes were non-mixed, or separated from students by a curtain.

In the amphitheatre of Shaheed Rabbani University this Saturday, the speakers who took to the dais lambasted the women who took to the streets in recent days in the country to demand respect for their rights. They also defended the new executive, which banned demonstrations unless authorized by the Ministry of Justice.

“We are against these women who protest in the streets claiming that they are representative of women“Afghan women,” denounced the first speaker.

“Is freedom to love the old government? No, that’s not freedom“, she added. “The outgoing government abused women. Women were recruited solely for their beauty“.

Another student, Shabana Omari, said he agreed with the Taliban policy that all women should wear a veil:”Those who don’t wear the hijab hurt us, all of us“.

For another speaker, Somaiya, things have changed, in good, since the return of the Taliban : “We will not see any more “bihijabi“(people not wearing headscarves). Women will be safe. We support our government with all our strength“.

At the end of the speeches, the demonstrators marched in the street holding signs that read “women who left Afghanistan cannot represent us“or “we are satisfied with the attitude and behavior of the Mujahideen (Taliban)”.

More than three weeks after taking power, the Taliban this week unveiled the composition of their provisional government, but their politics still have many shadow areas.

The new regime indicated that women would be allowed to work “in accordance with the principles of Islam“, without elaborating.