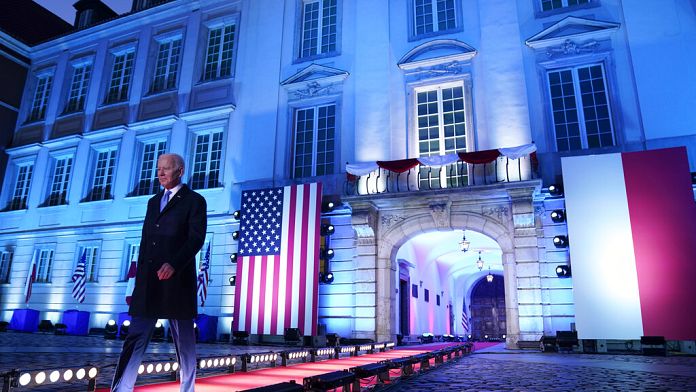 “For God’s sake, this man can’t stay in power!” Here is one of the shock statements of Joe Biden who also compared Vladimir Putin to a butcher his stay in Poland. Coming to show his support for NATO member countries after the invasion of Ukraine by Russia, the American president chose the offensive formula. And it didn’t take long to react.

Starting with the head of American diplomacy Anthony Blinkenwho tried to put out the fire, on the sidelines of a visit to Israel: “As you know, and as you have heard us say many times, we don’t have a regime change strategy in Russia or elsewhere. In this case, as in all cases, it is up to the people of the country in question to decide. So it’s up to the Russian people to decide.”

the Kremlin also quickly reacted, through his spokesperson Dmitry Peskov :“It’s not for Biden to decide. The president of Russia is elected by the Russians. This speech – and the passages about Russia – are stunning, to use polite terms.”

The French President Emmanuel Macron cautioned against verbal escalation: “I think you have to be factual first and then indeed do everything so that the situation does not get out of hand. I won’t use that kind of stuff because I continue to discuss with President Putin. What do we want to do collectively? We want to stop the war that Russia has launched in Ukraine without waging war and without escalation. This is the objective that has been ours for the past month. But if we want to achieve this, we must not escalatewhether in word or deed.”

On his side, Vladimir Poutine congratulated the Russian National Guard on the sixth anniversary of its establishment, during a speech. The Russian President specifically addressed personnel involved in what he calls “the special military operation in Donbass and Ukraine.”