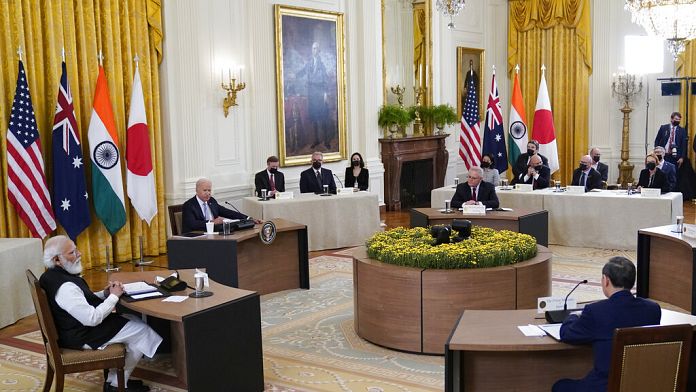 After the announcement of a spectacular military alliance in the indo-Pacific area, Joe Biden continued to advance his pawns in the region but in a more “informal” format, hosting the Prime Ministers of India, Japan and Australia on Friday.

The American president, in search of alliances with China, wants to awaken this diplomatic format, called “Quad”.

After a virtual summit in March, he brought it together again, for the first time in person and at such a high level.

From the White House, Scott Morrison (Australia) and Yoshihide Suga (Japan) welcomed the meeting, which they said aims to promote “a free and open Indo-Pacific region,” the formula for criticizing, but not naming, China and its ambitions in the zone.

“We are four first-rate democracies, with a long history of cooperation, we know how to get things done,” said their host Joe Biden.

Sketched out after the devastating tsunami of 2004 and formalized in 2007, the “Quadrilateral Security Dialogue” has long been sleepy.

By reviving it, Joe Biden somehow continues the” pivot to Asia ” of American foreign policy, already dear to Barack Obama.

But after the dramatic announcement of the AUKUS military partnership with the UK and Australia-and its submarine contract that enraged France – Washington wants to present the “Quad” in a consensual light.

It is an “informal” and “intimate” cenacle intended to “develop better communication channels,” senior White House officials said in an interview with reporters.

There is no “military” aim, they hammered, assuring that the “Quad” would be “complementary” to other regional initiatives, in response to a question about its articulation with ASEAN.

Some members of this organization of ten Southeast Asian nations fear that the American offensive in the region could lead to an escalation with China.

Scott Morrison assured the press that the members of the ” Quad “were ready to face” any pressure that would affect any of us”, and added:” We want all Indo-Pacific countries to have this opportunity “because they”attach importance to their sovereignty”.

On Friday, the “Quad” spoke of economic, environmental and the fight against the pandemic.

The four partners want to launch an initiative to protect the supply of semiconductors, the essential electronic components for washing machines, airplanes and smartphones that many manufacturers around the world are currently struggling to obtain.

“For Washington, the challenge is to move beyond the single security paradigm and significantly improve America’s economic position in Southeast Asia,” says Jonathan Stromseth, a specialist in the region, in a note published by the Brookings think tank.

He believes that the effort to revive the “Quad” is “emblematic” of the Biden administration’s ” approach to China, presented as competitive when necessary, cooperative when possible, and confrontational when necessary.”

Joe Biden, if he has kept a hard line against China, more or less comparable to that of Donald Trump, approaches the confrontation with Beijing differently.

The American president, who wants to overcome the only face-to-face between the two super-powers, hopes to reawaken the game of alliances, and encourage his traditional partners to take frank positions in the face of China.

488 journalists imprisoned around the world in 2021, a record (Reporters Without Borders)