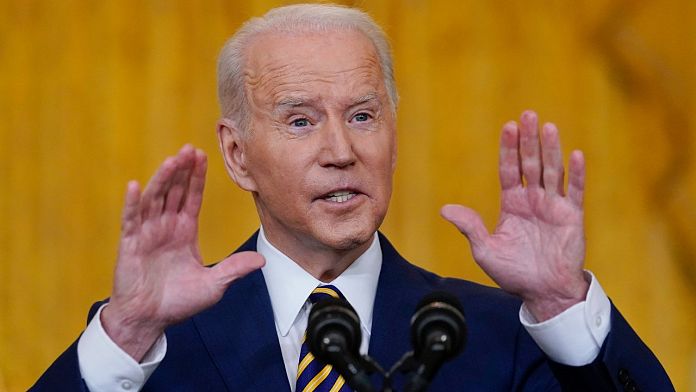 Joe Biden assured Thursday that the United States would continue to track jihadists around the world after the death of the leader of the Islamic State (IS) group, who blew himself up Thursday during a raid by American special forces in Syria.

“We are on your trail and we will find you”

The US President said that with Abu Ibrahim al-Hashimi al-Qurachilittle known to the general public, disappeared “major terrorist threat”in a solemn address at the White House.

“In a final desperate gesture of cowardice”Qurachi, at the head of the jihadist nebula for two years, “chose to blow himself up (…), taking several members of his family with him, as his predecessor had done”Abu Bakr al-Baghdadikilled in an American raid in October 2019, said Joe Biden.

Martial, he promised that the United States, despite the withdrawal from Afghanistan last August, remained committed to the international fight against terrorism.

“This operation is proof that America has the means and the ability to eliminate terrorist threats no matter where in the world they hide.”he said. “We are on your trail and we will find you”launched the 79-year-old Democrat, referring to the leaders of jihadist groups around the world.

Qurashi “killed himself and his immediate family without a fight, even as we tried to call him to surrender”said General Kenneth McKenzie, Chief of the US Army Central Command. The senior officer said the jihadist leader had been identified by his fingerprints and DNA.

Joe Biden followed the operation from the ultra-secure “Situation Room”during the approximately two hours that it lasted, in the night from Wednesday to Thursday.

After the attack by the commando, who left by helicopter from the predominantly Kurdish city of Kobani (north) and arrived near camps for displaced people in the locality of Atmé, in northwestern Syria, AFP correspondents found a partly destroyed building, the floor stained with blood.

On another site, the charred remains of an American helicopterofficially victim of a technical problem and destroyed by the special forces before being abandoned.

Joe Biden spoke of an attack “incredibly difficult”due to the presence of civilians and in particular children, used as human shields according to the Americans.

The operation did “at least” three civilian victims, Qurachi’s wife and two children, died in the explosion caused by the jihadist leader, the Pentagon said. But uncertainties persist on the total human toll.

LONG “Save The Children” made state “at least” six children killed in total, including two babies. The Syrian Observatory for Human Rights (OSDH) reported the total figure of thirteen dead in the operation, civilians and combatants alike, including four women and three children. The United States assured that no civilians had been killed as a result of American actions.

The subject is particularly delicate for the American army, involved at the end of August in a drone strike which killed by mistake ten civilians, including seven children, in Kabul.

Joe Biden also said that he favored a commando operation, “much more risky” for American soldiers than an air strike, out of consideration for civilians.

No American soldier was injured, either in the explosion caused by the jihadist leader, or in clashes which then pitted the elite soldiers against another jihadist and his wife on a lower floor of the building, dead both, then to assailants from outside, two of whom lost their lives.

the “genocide pilot” against the Yazidi minority

Qourachi, of Iraqi nationality, was head of the group responsible for numerous atrocities, abuses and attacks in the Middle East and in several Western countries at the end of October 2019.

Joe Biden described him as the “responsible” of a recent attack on a prison in Syria, and the “genocide pilot” and mass rapes against the minority Yazidis.

Nicknamed “the teacher” where the “destructive”Amir Mohammed Said Abdel Rahman al-Mawla was a jihadist with multiple aliases, presented as “the emir” Abu Ibrahim al-Hachimi al-Qourachi since his accession to the head of the jihadist group.

Abu Ahmad, the owner of the house where he was holed up, told AFP that Qurachi had “lived here for 11 months. Didn’t see anything suspicious. He just came to see me to pay the rent”.

Members of the US-trained Kurdish-dominated Syrian Democratic Forces (SDF) took part in the operation, but did not take part in the assault itself, according to Washington.

The raid came days after an IS assault on an SDF-held prison ended, the jihadist group’s biggest offensive since its territorial defeat in Syria in 2019.

Despite losing its strongholds in Syria and neighboring Iraq, the Islamic State group continues to carry out attacks through sleeper cells.