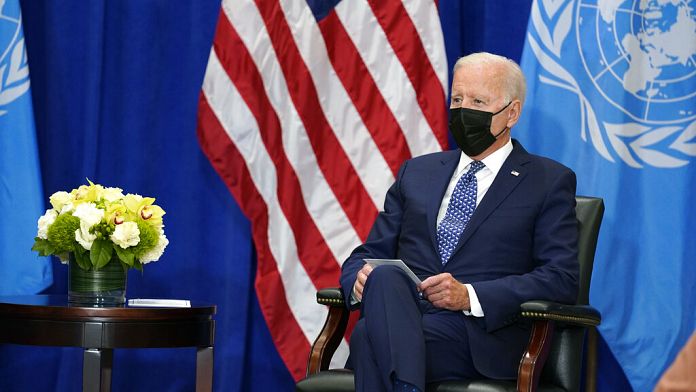 Joe Biden claimed at the UN on Tuesday that he does not want a “new Cold War” with China, and defended his commitment to diplomacy and multilateralism in the face of European allies who accuse him of going it alone too often.

“We do not wanta new Cold War, or a divided world in rigid blocks“, launched the President of the United States for the first speech of his mandate to the General Assembly of the United Nations. Yet, “the United States will participate in the competition, and participate vigorously“, he warned in delivering his vision of the confrontation with Beijing, without directly naming the rival power.

“With our values and strength, we will defend our allies and friends, and oppose the attempts of stronger countries to dominate the weaker“, he hammered. President Biden, engaged in a fight against the “autocracy“, also promised to”defending democracy“.

As a prelude to this exchange, UN Secretary General Antonio Guterres had warned Washington and Beijing against a deterioration of global crises that would be “much less predictable than the Cold War”, and called on the two superpowers for “dialogue” and understanding.

Washington goes “announce additional commitments” for boosting immunization in least developed countries Wednesday, during a virtual summit that he organizes, Joe Biden said in a speech to the UN General Assembly.

The US President also promised to work with the US Congress to “double again” the amount of international assistance granted by the United States to the least developed countries to address climate change. According to experts, this means a commitment of about $ 11 billion a year.

“With our help, as well as increased capital from the private sector and other donors, we will be able to reach the goal of mobilizing $ 100 billion to support climate action in developing countries“, he added.

Developed countries committed themselves in Copenhagen in 2009 to mobilise $ 100 billion a year between 2020 and 2025 for this assistance, but the funding plan, to be announced at COP26, has fallen behind schedule.

COP26 President Alok Sharma said on Twitter “welcome with strength“Joe Biden’s promise. “We must continue this momentum“, he added. President Biden also promised that the United States is committed to investing “$ 10 billion to end hunger and invest in the food system“in the United States and abroad.

Regarding the Israeli-Palestine conflict, Joe Biden said that the “two-state solution“, that is, the creation of a Palestinian state alongside the Israeli state, was “the best“to resolve the conflict, in a speech to the UN General Assembly.

“I continue to believe that the two-state solution is the best way to secure Israel’s future as a democratic Jewish state, living in peace alongside a viable, sovereign and democratic Palestinian state“, said the US president, adding: “We are currently far from that goal, but we must never give up believing that progress is possible.”.