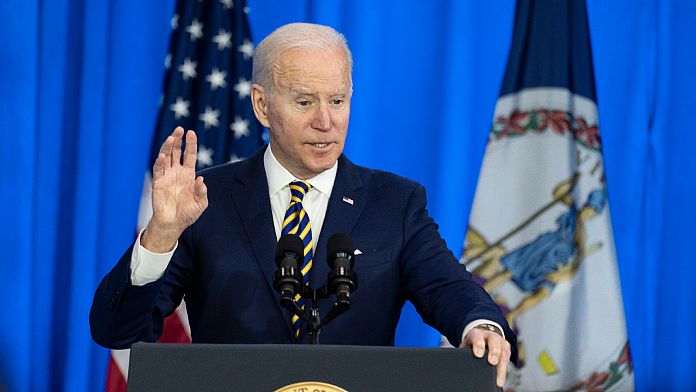 The president of United StatesJoe Biden on Thursday called on its citizens to leave Ukraine “now” due to the increased risk of a Russian invasion, warning that the situation could “get carried away quickly” despite the diplomatic efforts of recent weeks.

“Things could quickly get carried away”, warned the American president in an interview with NBC. He repeated that he would not send soldiers on the ground in Ukraine, even to evacuate its nationals in the event of a Russian invasion, because that could trigger “a world war”.

“When Americans and Russians start shooting at each other, we are in a very different world”he said.

“American citizens should leave, they should leave now. We are dealing with one of the greatest armies in the world”pleaded the president in reference to the Russian army.

“If you are in Ukraine, you should leave”indicates the Ministry of Foreign Affairs on its website. “Russian military action in Ukraine could disrupt travel and services across the country. Flights could be disrupted or cancelled”says the ministry, which concludes with: “Be Prepared to Take Cover”.

The Kremlin is accused of preparing a new military operation against Ukraine, after the annexation of Crimea in 2014. Accusations rejected by Russia, which claims to just want to ensure its security in the face of hostility from Kiev and NATO .

A few hours before the declarations of Joe Biden, the American ambassador to the UN, Linda Thomas Greenfieldurged China “to encourage the Russians” to make the right choices in the Ukrainian crisis.

“The Chinese have expressed strong concern in the Security Council (January 31) for the protection of the integrity of borders and the sovereignty of States. That’s exactly what the Russians do – they threaten the integrity of a border.”asserted the diplomat.

“So it would be extremely important for China to convey that message.” and “I encourage my Chinese counterpart in New York to relay it”she clarified.

US B-52 strategic bombers arrived in the UK on Thursday to take part in an exercise, “long-planned” with NATO allies, assures the US Air Force.

The US Navy said on Thursday that four US destroyers left the United States last month to take part in a naval exercise in the Sixth Fleet area, which includes the Mediterranean.

These announcements come at a time when, in addition to some 100,000 men massed on the Ukrainian border, the Russian and Belarusian armies are carrying out major maneuvers in Belarus, a former Soviet republic bordering Ukraine, which has remained an ally of Moscow. .

The number of soldiers and equipment participating in these exercises has not been officially provided, but Westerners claim that 30,000 Russian soldiers have been deployed in Belarus as part of this exercise.

Russia also announced on Thursday the arrival in Crimea of ​​six warships for upcoming maneuvers in the Black Sea, which borders southern Ukraine.

The deployment of these soldiers was immediately qualified by the Ukrainian presidency as a means of “psychological pressure” employed by Moscow.

Amid a war of nerves and intensified diplomatic efforts in recent weeks, German Chancellor Olaf Scholz for his part warned Russia not to underestimate “unity” and “the determination” of Europeans.