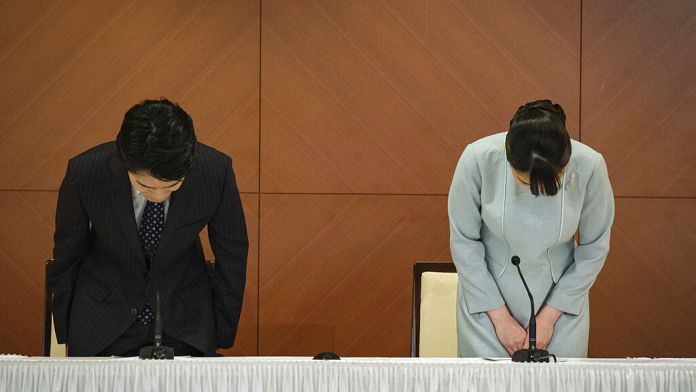 Princess Mako, niece of Japan”s Emperor, married Tuesday after years of controversy over her union with her commoner fiancé Kei Komuro, waiving a large financial indemnity and planning to move to the United States.

“The matrimonial documents were presented and accepted,” a representative of the Imperial Agency told AFP on Tuesday. In the morning, Japanese television had shown Mako leaving the imperial residence of Akasaka in Tokyo and saying goodbye to his family, bowing to his parents and kissing his sister.

“Kei is an irreplaceable being,” Mako said in a statement broadcast live on television. “I love Mako”, proclaimed her husband, and “I would like to be next to the love of my life”.

But the union of Emperor Naruhito’s niece, who turned 30 this weekend, and Mr Komuro, who works for an American law firm, did not start in the best conditions, as the Imperial Agency previously reported that the princess suffered from post-traumatic stress due to media coverage.

Mako has endured years of criticism over his marriage plan to Kei Komuro, also 30, under attack over allegations that his mother borrowed money from a former fiancé and did not pay him back.

This quarrel, which is still unresolved, caused a scandal in Japan, where impeccable behavior is expected of members of the imperial family.

The marriage had been postponed and in 2018 Kei Komuro left for the United States to continue his law studies. He only returned to Japan last month.

“There are different opinions about my marriage to Kei,” Mako acknowledged Tuesday. “I would like to thank those who worried for me and those who have always supported us, Kei and I, without listening to the unfounded rumors,” she added, stressing that she felt “fear, sadness and pain” because of the allegations.

Despite the negative media tone, and some protests against the union, just over half of the population (53%) support it, according to a poll by the daily Yomiuri published on Tuesday, with only 33% saying they do not see it with a good eye.

“These three years must have been long for her, so I’m really happy that this day has finally arrived,” said Mayu Ogura, 30, interviewed by AFP near the Imperial Palace.

“This atmosphere is rather sad,” said Shigeru Hashimoto, 54.

Comparison with Harry and Meghan

The couple should soon move to New York, which raises inevitable comparisons with another royal couple, British this one: Prince Harry and Megan Markle.

It is not yet known if Mako will work once there, but she is well qualified, having studied art and cultural heritage at the International Christian University in Tokyo, where she met Mr. Komuro, and spent a year at the University of Edinburgh.

She also holds a master’s degree in museum studies from the British University of Leicester.

The imperial institution had clarified earlier this month that the wedding ceremony, banquet reception and other rituals would not take place and that a lump sum payment usually granted to women of the imperial household who marry commoners, and up to 153 million yen (1.2 million euros), would not be granted.

Mako lost her royal title when she and Kei Komuro had their marriage registered, a usual situation for women in the line, but she is the first in post-war Japanese history to refuse compensation.

In Japan, the throne can only be passed to male family members, and the children of royal women who marry commoners are not included.

Changes to these rules have been debated, and in July a group of government experts compiled notes on the issue, including a proposal for royal women to remain in the family even after marriage.

However, any change to the system is likely to be a long time coming, with hardliners and traditionalists vehemently opposing any move to allow women to rule.