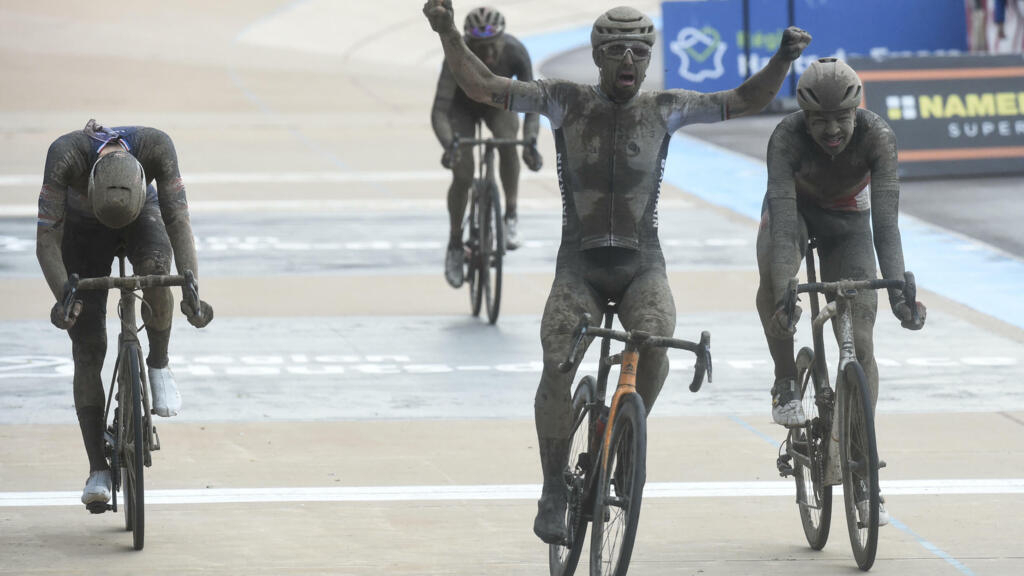 The European champion, the Italian Sonny Colbrelli, won the legendary race of the Paris-Roubaix on Sunday, in his first participation, in extreme conditions. He was ahead of Belgian Florian Vermeersch and Dutchman Mathieu van der Poel.

Rain, mud, slippery cobblestones and serial falls… the “queen of classics” has been faithful this year to its reputation of “hell of the North” and it is the European champion, the Italian Sonny Colbrelli who won, Sunday 3 October, for his first participation.

Colbrelli (Bahrain) sprinted past his last two companions, Belgian Florian Vermeersch and Dutchman Mathieu van der Poel in the Roubaix velodrome, before crashing to the ground, screaming his joy.

Irresistible since the spring, the Italian took off his first “monument” at the age of 31. Although he has thirty victories to his name, he had never before climbed on the podium of a major classic.

Behind the trio, Italian Gianni Moscon, who had glimpsed success until a puncture 30 kilometers from the finish and then a crash, took fourth place 44 seconds behind his compatriot.

Belgian Wout van Aert, one of the big favorites, placed 7the in a group set by his compatriot Yves Lampert (5e) ahead of France’s Christophe Laporte (6e).

“The race of my dreams”

On the soggy and mud-covered cobbles, van der Poel made a strong impression in a race that turned to the disadvantage of his great rival, the Belgian Wout van Aert, and the number one team, Deceuninck.

Generous and prodigious of his efforts, van der Poel found himself alone in the pursuit group behind Moscon, who started alone in the attack 53 kilometers from the finish. He could not then provoke the decision in the trio of neophytes who fought for the victory.

>> To read : Joseph Areruya, first Rwandan cyclist on the Paris-Roubaix

Colbrelli is the second rider to win the “queen of classics” in his first appearance. Apart from the German Josef Fischer who had opened the list in 1896, the Frenchman Jean Forestier is the only neophyte, in 1955, to have established himself from his debut.

“This is the race of my dreams with the Tour of Flanders,” exulted the winner. “I followed van der Poel in the final, I did a great sprint. I focused on van der Poel but the guy from Lotto-Soudal (Vermeersch) almost surprised me. I managed to pass 25 meters from the finish.”

The Lombard rider succeeds the Belgian Philippe Gilbert, winner in 2019 and distanced this time before the halfway point. He signed the 12e Italian victory, but the first in XXIe century (Andrea Tafi, last Italian winner in 1999).