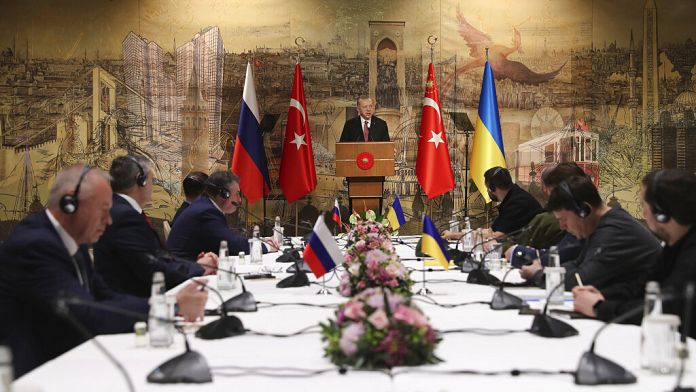 Russia pledged to reduce military pressure around the Ukrainian capital on Tuesday after a session of talks described as “substantial” in Istanbul. Ukraine demands an international agreement on its security.

It is in the Turkish city of Istanbul, straddling Europe and Asia, that the hope of putting an end to the war in Ukraine is reborn. For the first time in several weeks, talks between Russian and Ukrainian negotiators over an agreement on Ukraine’s neutrality have been described as “substantial“by the Russian side.

“In order to build mutual trust, create the necessary conditions for the continuation of the talks and the achievement of the final goal – coordination and the signing of an agreement – the Russian Ministry of Defense took the decision to reduce radically military activity in the direction of kyiv and Chernihiv“, said Alexander Fomin, Russian Deputy Defense Minister.

For its part, Ukraine is calling for a “international agreement“to guarantee its security, of which several guarantor countries would be signatories. According to the Ukrainian negotiator Mykhailo Polodyak, “there will be a referendum for Ukrainian citizens to express their opinion on this treaty and how it should work. Only then will there be a process of ratification by the parliaments of the guarantor countries and by the Ukrainian parliament“.

Ukraine is now awaiting Russia’s response to its proposals. According to Kiyv, a meeting between Vladimir Putin and Volodymyr Zelensky could take place as soon as a draft peace agreement is ready.

The representatives of Ukraine and Russia were received by Turkish President Recep Tayyip Erdoğan, according to whom the two parties have “legitimate concerns“. Before the start of the talks, he called on the negotiators to “put an end to this tragedy“.

Turkey hosted on March 10 in Antalya the first meeting between the Russian and Ukrainian foreign ministers since the start of the Russian invasion on February 24. This meeting did not lead to a ceasefire or any other progress.

“Convoy of Freedom”: on the Canadian model, the truckers want to block Paris this Saturday