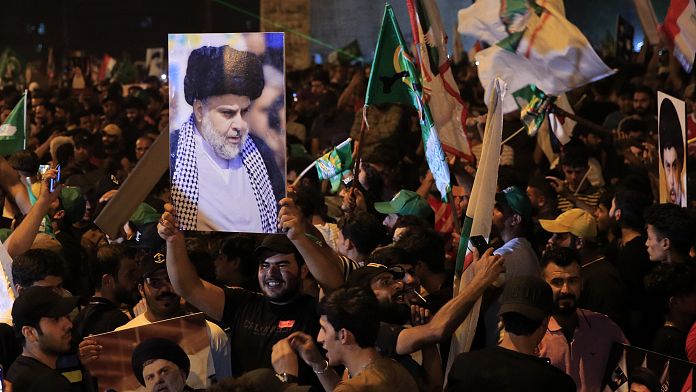 The results of the legislative elections have “nothing official” yet in Iraq, but for those few hundred supporters of Iraqi Shiite leader Moqtada al-Sadr, there is no doubt. Then in Tahrir Square in central Baghdad, horns, youyous and firecrackers sounded :

“Today, we congratulate the Iraqi people on the victory of the reform project led by leader Moqtada Al-Sadr. Today we have the feeling that Iraq has been liberated. We haven’t had that feeling since 2003. Today, Iraq is truly free of corruption” says a supporter, Fadhil Al-Taie.

Populist Moqtada Al-Sadr welcomed the victory. His supporters believe him capable of reforming Iraq, driving out corruption. A former militia leader, he fought American troops and positioned himself against Iran. According to preliminary results, its current would have 73 seats in the next parliament of 329 members.

It would be followed by the “pRogress” bloc led by the speaker of the dissolved parliament, Mohammad al-Halbousi, with 38 seats. The “State of Law” bloc led by former prime Minister Nouri al-Maliki would come in third with 37 seats.

But none of the political blocs in the running have obtained a majority, the usual negotiations will be launched to form the government in a few weeks.

Sunday’s elections were originally scheduled for 2022. Promised by Prime Minister Mustafa al-Kazimi, they were put forward to quell popular protests demanding reforms. Born in October 2019 and repressed in blood (at least 600 dead and 30,000 injured), the movement has since run out of steam and participation in these elections has reached a historically low level, of only 41%.

The Frankfurt Book Fair is back, in real life