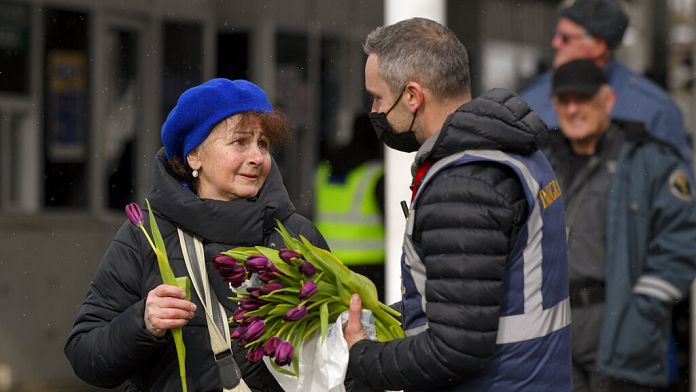 International Women’s Day was celebrated on March 8 in many countries. In the processions, messages of solidarity with regard to Ukrainian women.

For this international day for women’s rights, many rallies were organized around the world. Against the backdrop of these mobilizations is the ongoing war in Ukraine.

In the processions, many messages of solidarity with regard – precisely – to Ukrainian women.

“Neither women nor land are territories of conquest,” read a banner at the demonstration in Paris.

In Siret, a Romanian town on the border with Ukraine, women arriving from Ukraine were given a flower. A delicate attention bringing a little comfort in the face of the hardships endured.

In Russia, a few women gathered in Saint Petersburg to lay flowers in tribute to the victims of the war in Ukraine.

Among them, Alexandra who explains: “We want to honor those who died, the civilians first, as well as the soldiers on both sides. __In their honor, we bring the flowers that our men gave us for this day.“

March 8 was declared International Women’s Day in 1975 by the United Nations. Every year, it is an opportunity to mobilize in favor of women’s rights.

United States: what you need to know about the NRA, the powerful pro-gun lobby

E. Macron wants to integrate abortion and the environment into the Charter of Fundamental Rights of the EU