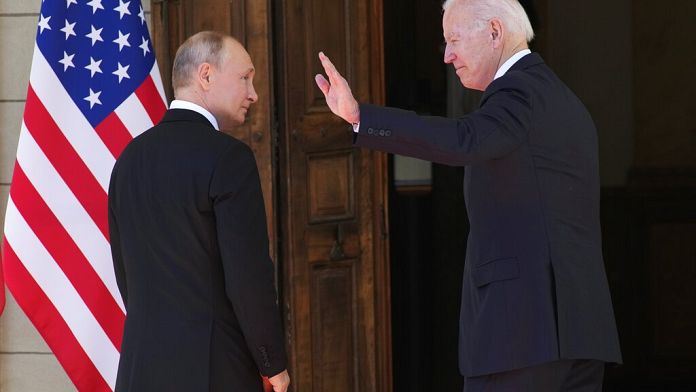 Diplomatic efforts marked by a frenzy of phone calls on Saturday between Western leaders and Moscow failed to ease tensions around Ukraine, with the Kremlin denouncing US “hysteria” and Joe Biden threatening Vladimir Putin with ‘severe and swift repercussions’ in case of attack.

Washington insisted on Friday on the risk of an “imminent” invasion of Ukraine by Russia, which has massed more than 100,000 soldiers near the border and has just begun military maneuvers in the Black Sea and in Belarus, framing de facto the country.

Such an invasion would have “rapid and severe” consequences for Russia, Joe Biden warned on Saturday during an interview with his Russian counterpart.

“The hysteria has reached its peak,” commented Vladimir Putin’s diplomatic adviser, Yuri Ushakov, while specifying that the two presidents had agreed “to continue contacts at all levels”.

This exchange did not “lead to fundamental change”, recognized an American official on condition of anonymity. According to him, “we still do not know if Russia will favor diplomacy over the use of force”.

Same observation in Paris, after an interview between President Emmanuel Macron and his Russian counterpart: “Our feeling is that Vladimir Poutine remains on the same bases (…) in a state of mind of requirement, of provocation, taking careful, however, to keep all his options open”.

Since the first troop deployments near Ukraine in November, Moscow has denied any intention of invasion, but has called for an end to NATO expansion and Western support for this former Soviet republic, which she considers to be part of her sphere of influence.

During his discussion with the French President, Vladimir Putin criticized the “large-scale deliveries of modern armaments” to his neighbor, believing that they created “the preconditions for possible aggressive actions by Ukrainian forces” in the East Ukraine, where Russia has supported armed separatists for eight years.

Mr. Macron repeated to him the “determination to react” of Westerners in the event of a Russian military operation.

The German Chancellor is to take up the torch, going to Kiev on Monday and Moscow on Tuesday.

At the same time, the list of countries calling on their nationals to leave Ukraine continues to grow, including the United States, Germany, Italy, the United Kingdom, the Netherlands, Canada, Norway or even Australia, Japan and Israel.

The KLM airline announced on Saturday the suspension of flights to Ukraine until further notice.

Moscow also recalled some of its diplomatic staff, claiming to fear adverse “provocations”.

The United States also ordered the departure of most of the personnel of the American embassy in Kiev, noting that a Russian offensive could “begin at any time and without warning”. Some 160 American soldiers who were training Ukrainian forces were also ordered to leave.

Canada meanwhile announced Saturday to temporarily close its embassy in Kiev and move its operations to a temporary office in Lviv, western Ukraine.

And Australia announced on Sunday that it was evacuating its last diplomats still stationed in Kiev, also moving its activities to Lviv.

Ukrainian President Volodymyr Zelensky for his part once again deemed the American statements too alarmist.

“All this information (about a possible attack) only causes panic and does not help us,” he said.

In Kiev, thousands of demonstrators marched on Saturday, saying they refused to give in to panic precisely, even if they took the threat seriously.

“Panic is useless. We must unite and fight for our independence,” said student Maria Chtcherbenko, holding a sign “I remain calm. I love Ukraine”.

Adding to tensions, Russia launched new naval maneuvers in the Black Sea on Saturday to practice “defending” Crimea, a peninsula annexed in 2014.

The Ministry of Defense also claimed that the Russian Navy had chased a US submarine from its waters in the Pacific Ocean on Saturday.

False, replied Washington: “There is no truth in the Russian assertions concerning our operations in their territorial waters”, denied the American army.

Westerners rule out committing their armies in the event of war, but have planned devastating economic reprisals.

This crisis is, according to Westerners, the most dangerous in Europe since the end of the Cold War.

The White House has already outlined the scenario for the Russian offensive, citing probable “aerial bombing and missile fire” and a possible assault on the capital Kiev.