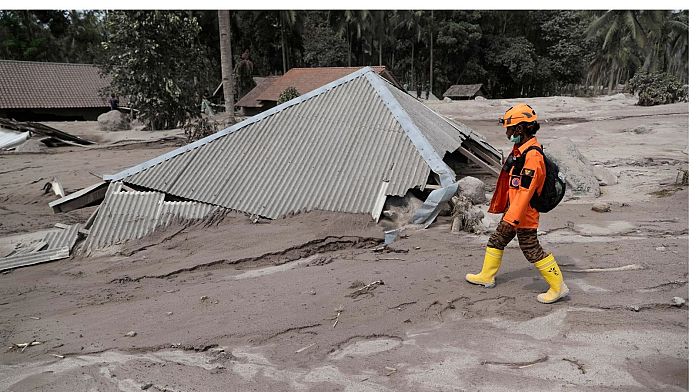 The death toll from the spectacular Semeru volcano eruption in Indonesia reached 13 on Sunday, the disaster management agency said as rescuers continue to search the area covered with a thick layer of ash.

The volcano in the east of the island of Java released a vast plume of ash and gray smoke on Saturday after 3 p.m. local time, triggering panic among residents of surrounding villages who fled as the region plunged into the sea. darkness in the middle of the afternoon.

“The death toll is now 13. Rescuers found more bodiesAgency spokesman Abdul Muhari told AFP, adding that 10 people trapped by the eruption on Saturday were taken out of a mine where they were stranded.

The eruption took residents of the area by surprise. Videos showed villagers running away in front of the growing ash cloud. At least 11 villages in Lumajang district were covered with a thick layer of ash, which almost completely buried some homes and vehicles, and killed livestock. Some 900 people had to go to shelters and mosques to stay overnight.

About ten people were rescued after being blocked by the piles of ash. They are workers in a sand mine, according to the television channel Kompas TV. At least 57 people were injured in the eruption, including 41 burns, the disaster management agency said in a statement.

The eruption destroyed at least one bridge in Lumajang, hampering the work of rescuers. In a video shared by the rescue service, we can see a scene of desolation, with roofs and palm trees emerging from the ash and debris covering the ground, in a landscape that has turned dark gray.

Authorities have asked residents not to approach within 5 km of the crater because the air saturated with ash dust in the area is dangerous for vulnerable people. Food aid, masks and body bags were sent to the area by the emergency services.

Mount Semeru, the highest peak in Java, rises to 3,676 meters. Its last major eruption was in December 2020. It had also caused the flight of thousands of people and covered entire villages. The authorities had maintained since this episode the alert level of the volcano at the second highest.

Indonesia sits on the Pacific “Ring of Fire” where the meeting of the continental plates causes high seismic activity. This Southeast Asian archipelago has nearly 130 active volcanoes on its territory. At the end of 2018, the eruption of a volcano between the islands of Java and Sumatra had caused an underwater landslide and a tsunami, killing nearly 400 people.