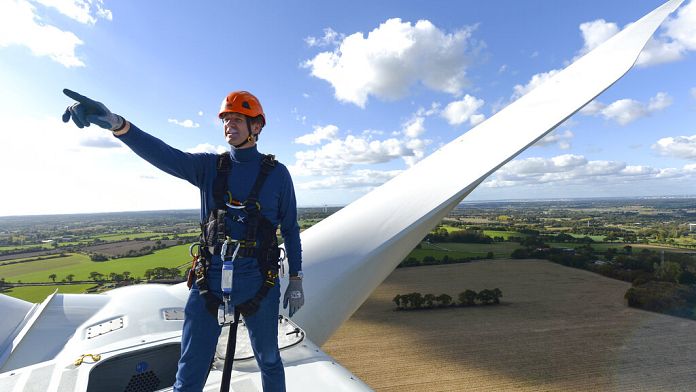 “In a campaign, you have to know how to take height”: it is at the top of a wind turbine that the ecologist presidential candidate Yannick Jadot defended Friday renewable energies and the purchasing power of the French, in the heart of the Pays de Retz, in Loire-Atlantique.

Orange construction helmet on his head and equipped with a harness, Yannick Jadot, as in the best hours of his actions at Greenpeace, climbed to the top of one of the three wind turbines of the Saint-Père-en-Retz park, at a height of 100 meters.

“We are here to say how much we support wind power,” he said, above the surrounding grove, cows grazing, and farmers plowing their plots.

“We will not let go on the energy transition”, assured the candidate, credited between 7 and 9% of the voting intentions.

“The President of the Republic wants to condemn the French to have higher and higher energy bills, he condemns the French to energy drunkenness, to justify a technological choice, that of nuclear, which is a risky choice that will be very expensive”, he developed, once back on land.

He recommends “controlling energy consumption”, in particular electricity, for example through better insulation of buildings, and the progressive deployment of renewable energies.

But “nuclear, we’re not going to shut it down tomorrow. By being totally responsible, we will close the reactors as and when we no longer need them, simply”, explained the MEP, in jeans and blue sweater.

Launched at the end of 2015 by the company Valorem, the three wind turbines of the Saint-Père-en-Retz park produce 18,500 megawatt/hour per year, and have not attracted recourse from opponents, explained the director of the company, Jean-Yves Grandidier.

The project is partly financed by crowdfunding, especially from the local population (72%). And reports local tax to the municipalities, he added.

“It is a 100% winning project”, for Yannick Jadot, because “it helps finance local authorities, fight against energy poverty and create local employment”.

In total, the Pays de Retz has 51 wind turbines, explained the mayor of Corcoué-sur-Lognes, a neighboring commune, Claude Naud, a fierce supporter of wind power, even if his commune could not install them, despite his wish, due to the presence of a military radar.

But wind turbines are sometimes decried, by associations of local residents, and also by the right and the extreme right, which highlight the nuisances they cause: noise, damage to the landscape, proximity to homes, natural or historical sites…

“When some people want to install wind power on a Natura 2000 area, I can understand that this can be debated,” said Mr. Jadot. “But environmentalists have never defended the idea of replacing the spire of Notre-Dame with a wind turbine, we are serious”.

“Listen, there is no noise,” stressed the deputy of Loire-Atlantique Matthieu Orphelin, who accompanied him like many members of his campaign team. “A drone makes more noise,” he says.

“We love landscapes, we defend our natural heritage, our cultural heritage. We have a vision of wind energy development that is perfectly responsible”, defended Yannick Jadot.

While the president of the Pays-de-Loire region Christelle Morançais has just ruled in favor of a “small nuclear power plant”, to replace the thermal power plant that is due to close in Cordemais, Mr. Jadot ruled that this decision was “not responsible neither vis-à-vis its territory nor vis-à-vis the employees of the Cordemais power plant”.