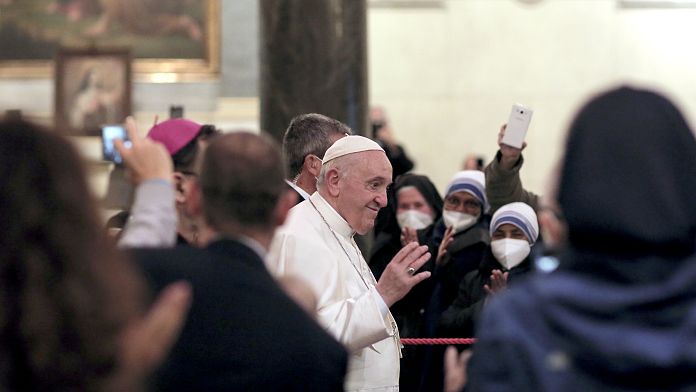 Welcomed by many families and exiled children, Pope Francis arrived Sunday morning in the migrant camp on the Greek island of Lesbos, to plead in favor of better integration of migrants in a Europe which, according to him, is struggling. to show solidarity.

The second day of his trip to Greece was marked by a whirlwind visit to the Mavrovouni camp, which still houses nearly 2,200 asylum seekers, in difficult conditions. The Pope was greeted by a crowd of migrants who had gathered between the containers and the tents of the camp. In a very warm atmosphere, the Holy Father greeted and blessed the families present at length, including many children. “Welcome!”, “We love you”, we could hear.

Nearly 900 police officers have been deployed to the Greek island. Banners here and there had flourished in the city of Mytilene and around the camp to welcome “Pope Francis” or denounce the alleged refoulements of migrants to Turkey.

Forty asylum seekers, mostly Catholics from Cameroon and the Democratic Republic of Congo (DRC), are due to attend the Angelus and the speech that the Pope will deliver in a tent, in the presence of several religious leaders and the Greek President Katerina Sakellaropoulou, European Commission Vice-President Margaritis Schinas and Greek Migration Minister Notis Mitarachi.

Christian Tango, a 31-year-old Congolese, must address the Pope. He “hope the pope will raise his voice“migrants”throughout the world and in particular to European countries which must welcome refugees with more humanity“, he told AFP on Saturday.”It’s a blessing this coming. The Pope is our spiritual leader“, Congolese Rosette Leo told AFP on Sunday, awaiting the arrival of the sovereign pontiff.

“Protagonists of a terrible modern odyssey”

His compatriot Orphée Madouda, who is going to attend the prayer, is delighted: “This is the first time that I will meet the Pope, I don’t think I will have the opportunity to see him again in my life“.”We are humans, we refugees“, he protests to AFP,”we must be treated like humans and not like prisoners“.

Some hope to return with the sovereign pontiff to Rome. François had brought twelve Syrians with him in 2016. And fifty migrants will be transferred from Cyprus, where he has just spent two days.

The possibility that some asylum seekers from Mavrovouni could accompany him to Italy has not been ruled out. In the open air, the tent camp was hastily erected a year ago, on a former army firing range on the Aegean island, when the structure of Moria, then the largest in Europe, was destroyed by flames.

When the island of Lesbos was the main gateway for tens of thousands of migrants to Europe, François had visited Moria in April 2016 and symbolically said: “We are all migrants“. Leitmotif of his pontificate, the cause of the refugees remains this time again the cornerstone of the 35th voyage of the pope.

Jorge Bergoglio, himself from a family of Italian migrants settled in Argentina, never ceases to advocate the reception of thousands of “brothers and sisters”, without distinguishing between religion, or refugee status or economic exile. On Saturday, François described the migrants as “protagonists of a terrible modern odyssey“, in a speech to the Greek leaders.

The 84-year-old Argentine pontiff also regretted that “Europe persists in procrastinating“facing the arrival of migrants”sometimes blocked” and “torn by nationalist egoisms“,”instead of being a motor of solidarity“.

He was speaking in Athens, where it was the first visit of a pope in 20 years. The Pope found in Lesbos a different situation from 2016 but around forty NGOs have nonetheless urged Francis to intervene to put an end to the alleged refoulements of exiles to Turkey, which Athens denies.

In a letter to the Pope, they also denounced the establishment in Greece of camps “closed and with controlled access,” financed in part by European funds. Surrounded by barbed wire and closed by X-ray portals, three of these camps have already opened on the islands of Samos, Leros and Kos, those of Lesbos and Chios being planned for next year.

The pontiff’s visit to Lesbos, shorter than in 2016, will be followed on Sunday in Athens by a mass in front of some 2,500 faithful in a huge concert hall.