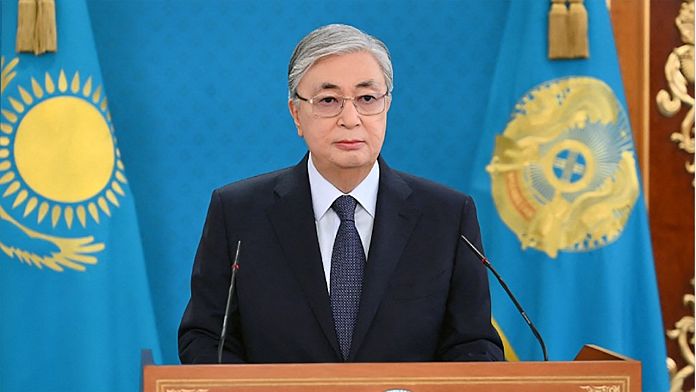 The President of Kazakhstan, Kassym-Jomart Tokayev, on Friday rejected any possibility of negotiation with the protesters and authorized the police to “shoot to kill” to put an end to the riots shaking the country.

“I ordered the police and the army to shoot to kill without warning”, he said during a televised address entirely in Russian. He described the calls, especially abroad, to negotiate with the protesters “absurd”.

“What kind of negotiations can we have with criminals, with murderers? We have had to deal with armed and trained bandits (…) They must be destroyed and it will be done shortly”, he said.

Kazakhstan, the largest country in Central Asia, is shaken by a protest that erupted in the provinces on Sunday after an increase in gas price before spreading to other cities and especially to Almaty, the economic capital, where the demonstrations turned into chaotic riots and murderous.

For the president, Almaty was attacked by “20,000 bandits” with a “clear plan, well coordinated actions and a high degree of combat readiness”. He felt that “it is the free media and certain people abroad who play the role of instigator “ of this crisis.

Help from the big Russian brother

A contingent of Russian troops and other countries allied with Moscow arrived Thursday in Kazakhstan to support the power in place by protecting strategic buildings and supporting the police.

Nine Russian military transport planes IL-76 have landed in recent hours on the tarmac at Almaty airport, according to these images from the Ministry of Defense and taken up by the Ria news agency.

On the app Flightradar monitoring of air flights, several Russian military planes were also spotted heading to Kazakhstan or arriving in Almaty.

Kassym-Jomart Tokaïev has warmly thanked Russian President Vladimir Putin on Friday, who “responded very quickly” to his request for help.

Earlier on Friday, he had assured that “Constitutional order has been largely restored in all regions” of Kazakhstan after days of violence, marked by exchanges of gunfire, which left dozens dead and morea thousand injured.

“The counterterrorism operation continues, the militants have not laid down their arms. Those who do not surrender will be eliminated”, he said during his speech.

The Interior Ministry for its part announced that 26 “armed criminals” had been killed and 18 injured in the riots. He confirmed that all administrative buildings had been “freed and placed under increased protection”, with 70 checkpoints established across the country.

More than 3,000 people have been arrested across the country, according to law enforcement.

The suddenness and intensity of these riots sparked a shock in Kazakhstan, a country of 19 million inhabitants rich in natural resources, renowned for its stable and authoritarian government.

The authorities had initially tried to calm the demonstrations, without success, by conceding a drop in the price of gas, by sacking the government and by establishing a state of emergency and a night curfew throughout the country.

Beyond the rise in prices, the anger of the demonstrators is directed in particular towards the authoritarian former president Nursultan Nazarbaïev.

81 years old, he ruled the country from 1989 to 2019 and retains great influence. He is considered the mentor of the current president.

The un Thursday called on all parties in Kazakhstan to “refrain from all violence” and Washington called for a “peaceful solution”.

The United States for their part on Thursday warned Russian troops against any violation of human rights or attempt to “take control” of the country’s institutions.

The german authorities also warned that “violence is never the appropriate response”.

The total lunar eclipse has been observed