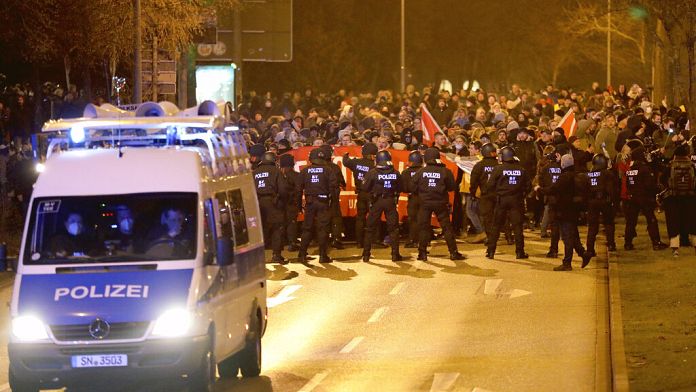 A demonstration against health restrictions on a Monday evening in Bautzen, a small German town in Saxony in the former East Germany …

In the processions, hooligans, neo-Nazis …

As in other cities across the country, and like on previous days, hundreds of unmasked protesters, some of them hooded, march through the streets against government sanitation measures.

In the processions, the most radical militants, including hooligans. The police keep watch to avoid any overflow of violence.

For Sven Hutter, professor at the Free University of Berlin, the risk comes from this radicalization of the movement: “We have noticed many more calls for violence against officials, against journalists and against other representatives of so-called dominant views. And this is where we can see a danger.”

The demonstrations on Monday, a reminder of history

The demonstrations on Monday have symbolic significance in Germany. In 1989, it was also Monday that the opponents of the East German communist regime gathered.

If the mayor of Bautzen is tolerant of the demonstrators and their demands, he denounces on the other hand this progressive trend towards a radicalization of the movement:

“You can be against the sanitary rules, but it can happen that you end up by mistake in a demonstration where there are 100 or 150 neo-Nazis, explains Alexander Ahrens. _And when you’ve witnessed this once or twice, you must be wondering if you really want to end up on the streets with Nazis. Do I want to demonstrate with the Nazis? I say it very clearly, this is not normal. “
_

Other protests are also taking place in western Germany. While the majority of them bring together peaceful activists, they still continue to worry the authorities.

“We can now speak of a real protest movement in Germany, because we have had several waves of mobilization over time and it is a movement which is becoming more structured and organized”, emphasizes Sven Hutter.

These protests are supported by around 15% of the German population, according to polls. But the composition of some processions today could ultimately discredit the movement.