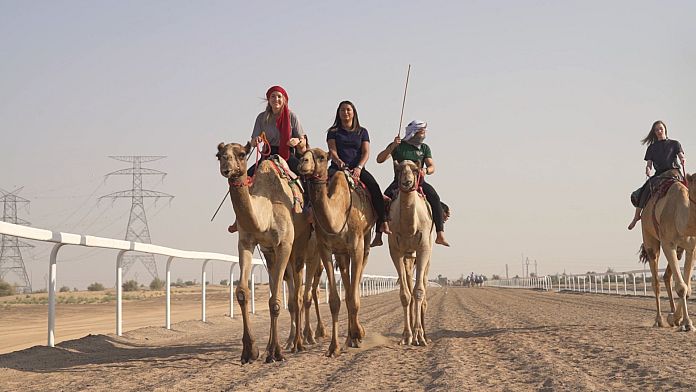 If camel racing dates back to the 7th century in the United Arab Emirates, the year 2021 indeed marks the year of renewal for women, who enter the history of this very popular sport in the Middle East and in part of Asia.

As part of the C1 Championship in Al-Marmoom, the Arabian Desert Camel Riding Center team participated in the first licensed female camel race.

Katie Higgins, a member of the racing team, initially wanted to learn to ride a camel for her personal hobby. But after having managed to ride the animal solo, the sportswoman wanted “start over and over again!“.

This center, co-founded by Linda Krockenberger, is intended for everyone; “no experience is required to join us“she explains.”We opened for the sole purpose of welcoming completely new riders“come for fun or for the race, says Lina Krockenberger, who also takes care of the training.

The sportswomen who have already embarked on this adventure have attracted the attention of other competitors, such as Laura Broadhurst, who stumbled upon an Instagram post about a camel ride.

“I saw a post on a Ramadan hike. It seemed like a good vibe. So I have come and even come back since“smiles this rider, who is now developing a passion for this discipline.

The transition from sitting to standing is arguably the most uncomfortable time for new riders. Once the animal moves forward, the secret that Linda Krockenberger reveals is to get comfortable, and “move with the movement of the animal“.

The pace of the races is more intense. It’s a feeling that combines “nervousness and excitement“according to Katie Higgins, who says she has not been able to do without it since the day of the race, who has”gathered more than 200 people“said Juma bin Subaih al Falasi, owner of the Arabian Desert Camel Riding.

What to awaken vocations? This is what the initiators of the center want, who also hope to be able to emphasize respect for animals.

Few people know how “approach or interact with the dromedaries“notes Lina Krockenberger, who is satisfied when people feel comfortable with these large mammals.

The trainer advocates prolonged contact with the animal so that “barriers“slowly dissolve between man and dromedary.

“I have found so much peace and happiness in working with camels, as well as in better understanding Emirati culture. I just wanted to create a place for others“.