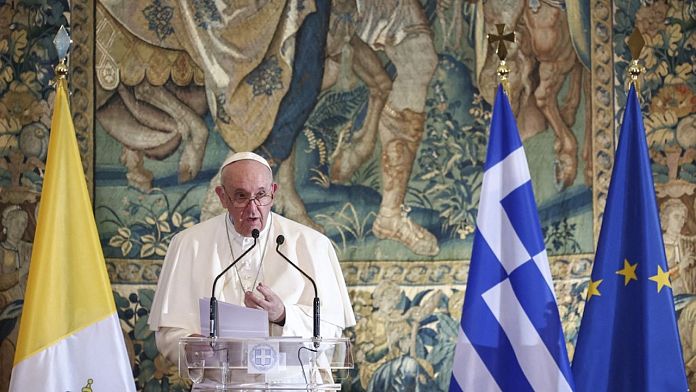 Pope Francis pointed out at the start of his visit to Greece that Europe was responsible for the migration crisis on Saturday, saying it was “sometimes blocked” and “torn apart by nationalist selfishness”.

Faced with the arrival of migrants at its doors, Europe “persists in procrastinating: the European community, torn apart by nationalist selfishness, sometimes appears blocked and uncoordinated, instead of being a motor of solidarity”, declared the Minister. Pope during a speech to political, civil and diplomatic authorities at the presidential palace in Athens.

A few minutes earlier, the President of the Hellenic Republic Katerina Sakellaropoulou had mentioned the “humanity of the Greeks and the disproportionate burden they have borne” in the management of this crisis.

Quoting in turn the “climate”, the “pandemic”, the “common market” and “generalized poverty”, the Pope repeated that the international community needed “concrete and active collaboration” through “multilateralism. which is not stifled by excessive nationalist claims “.

The Sovereign Pontiff was also concerned about the “decline of democracy, and not only on the European continent”. “In many societies preoccupied with security and numbed by consumerism, fatigue and discontent lead to a kind of democratic skepticism,” he said.

Faced with “the ravages of the climate crisis, he also said he was” sad “to see” many hundred-year-old olive trees consumed by fires often caused by adverse weather conditions “, saying he hoped that” the commitments made in the fight against climate change will not be just a facade “.

The Argentine pontiff arrived late Saturday morning in Athens for a two-and-a-half-day visit, the first by a pope to the Greek capital in 20 years.

Friday in Cyprus, he had already castigated “the wall of hatred” against migrants, among whom 50 will be transferred to Rome in the coming weeks thanks to an agreement with the Vatican.

Francis, who made this question a central theme of his pontificate, is due to return to the island of Lesbos on Sunday to meet migrants, as he had done in 2016.

Assault on the Capitol: a look back at the unfolding of this black day for American democracy