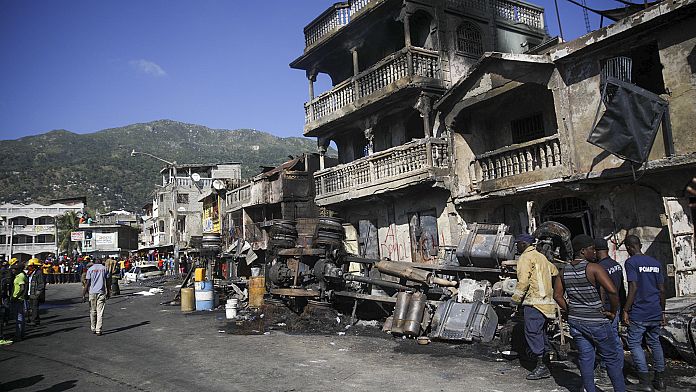 In Haiti, at least 75 people in the explosion of a tanker truck on Tuesday in Cap-Haitien. The balance sheet provided by the local authorities has been revised upwards. The Prime Minister has decreed three days of national mourning.

The tragedy occurred early Tuesday morning in Cap-Haitien (north of the country).

According to the deputy mayor of the city, the driver of the tanker would have tried to avoid a collision with a motorcycle taxi, thus losing control of his vehicle which overturned.

As a result of the accident, “members of the civilian population took the opportunity to collect fuel by filling containers of fortunes, which is the basis of a terrible explosion“, the director general of the Civil Protection of Haiti Jerry Chandler told AFP.

According to local authorities, at least 75 people died and at least fifteen were badly burned.

Images of the street where the disaster took place show charred car wrecks and buildings with facades blackened by flames.

Some 40 homes around the site of the explosion caught fire following the explosion, according to the deputy mayor, raising fears of an even heavier toll.

Haitian Prime Minister Ariel henry went there. He decreed three days of national mourning for “the memory of the victims of this tragedy which mourns the entire Haitian nation“.

Health services, overwhelmed, were trying to cope with the influx of patients requiring urgent care.

“We do not have the means to take care of the many seriously burned people“, testified to AFP a nurse from the Justinien hospital, where many wounded were transported.”I’m afraid we can’t save them all. “

Haiti, a poor Caribbean country, is plagued by a severe fuel shortage due to the gang control on part of the refueling circuit.

In recent months, armed gangs have greatly increased their hold over Port-au-Prince, controlling the roads leading to the country’s three oil terminals.

More than a dozen fuel transport vehicles were hijacked by gangs who demanded heavy ransoms for the release of the drivers, sparking strong discontent among the population.

Haiti was also the scene on Monday of demonstrations against the increase in gasoline prices.

Since October, telecommunications networks and the media have reduced their activities across the country, because they cannot find fuel for the thermal generators that supply the antennas with electricity.

This energy crisis is also hampering the functioning of the few hospital structures across the country.