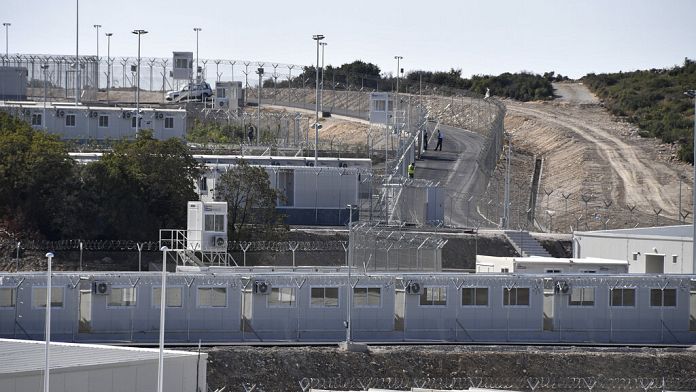 Barbed wire, X-ray scanners and magnetic gates: on the Greek island of Samos, the new”closed “migrant camp, the first of a” new generation “inaugurated on Saturday, looks at first glance like a secluded prison a quarter of an hour’s drive from the main city.

On a plot of more than 12,000 m2 lined with a double line of barbed wire, more than 300 asylum seekers will be transferred there from Monday from the soon-to-be-dismantled slum of Vathy, where they had hitherto crowded at the gates of the city.

“From Samos, we are sending a message to all the islands: the images (of the unsanitary camps) of Moria (on Lesbos) or Vathy are now a thing of the past,” said Greek Migration Minister Notis Mitarachi at the inauguration ceremony of the still empty camp.

Divided into several “neighborhoods”, asylum seekers will have access to food, sports, games, but also shared kitchens. The containers have five beds and a wardrobe each, overlooking Turkish-style toilets and shared showers, an AFP team found.

The new facility, criticized in advance by many NGOs, cost 43 million euros, according to the Ministry of Migration.

A detention centre has been set up for migrants rejected for asylum and destined to be returned to Turkey.

Likewise on the island of Leros, where a camp of this type is expected to be completed next month, and on that of Kos, immediately after.

In Lesbos, where the Moria camp was burned to ashes last year, work has not yet begun and is not expected to be completed until autumn 2022, according to a government source.

The European Commission has committed 276 million euros to fund five new camps on the Aegean islands that receive most migrants arriving from the nearby Turkish coast.

“This is the first reception centre of a new generation on the Aegean islands,” said Beate Gminder, deputy director general for migration and the interior at the European Commission in Samos.

Of the 550 migrants remaining on the island, some 300 living in unsanitary conditions have agreed to be transferred to the new camp where they are due to report on Monday.

Fears over the confinement of migrants

But they will only be able to go out during the day, from 08: 00 to 20: 00, transported by bus into the city and forced to present their fingerprints and an electronic badge at the magnetic gate at the entrance.

Disciplinary sanctions are provided for those who do not return before 20: 00.

“The word+ closed + often comes up,” admitted Mireille Girard, the representative in Greece of the UN High Commissioner for Refugees (UNHCR). “It worries the refugees who heard it. We discussed it with the authorities and it was repeated to us this morning that they will be open camps, which is very important,” she told AFP after the inauguration.

For her, ” Vathy was the worst camp in the whole country, so it’s good to close this chapter. That said, it is very important that people in the new structure can move freely inside and outside the camp to restore a sense of normality after their arrival”.

Athens continues to welcome the significant decongestion of the camps and the reduction of arrivals by almost 90% since 2019.

But NGOs explain this decline by the refoulement of migrants to Turkey, which the conservative Greek government denies.