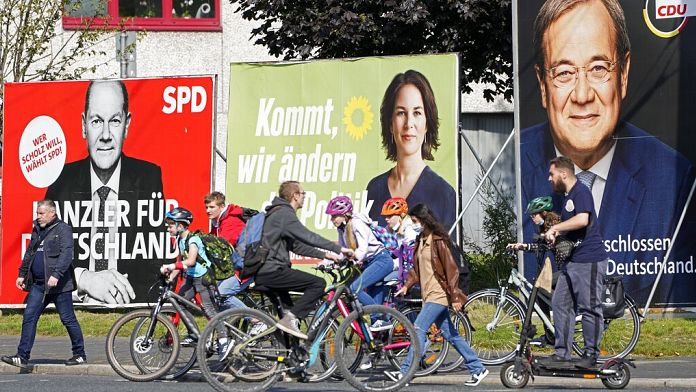 In Germany, the campaign for the legislative elections ended this Friday evening. The various candidates held their last meetings to try to convince voters.

The outgoing Chancellor, Angela Merkel came to support Armin Laschet, the leader of her conservative CDU/CSU party. It”s also in one of the fiefs of the Christian Democratic party, in Munich in Bavaria, that took place this last meeting.

In his speech, Armin Laschet attacked the social Democratic party SPD, which was slightly favored in the polls.

For her part, Angela Merkel called on voters to vote for Armin Laschet so that Germany “stay stable”.

“For Germany to remain stable, Armin Laschet must become federal chancellor“, she affirmed during this meeting.

For his part, the candidate of the Social Democratic party held his final campaign rally in Cologne.

Olaf Scholz, until then Finance Minister in the last Merkel government, hopes to become the future chancellor.

And Olaf Scholz, to add to the attention of voters of the 3rd age:”There will be no further lowering of the retirement age, and we are committed to keeping retirement pensions stable.“

The environmental party had invited its activists to Düsseldorf, around its leader, Annalena Baerbock.

With environmental issues increasingly central to public opinion, the Greens hope to reap benefits at the polls this Sunday.

Finally, the far-right party AfD, Alternative for Germany organized a meeting in Berlin.

This party created the sensation 4 years ago, when it entered the Bundestag. But today it seems to be worth it.

So to re-mobilise her troops, the leader goes after the vaccination campaign.

AfD is the only party that does not call for vaccination.

This Sunday, Germany’s 60 million voters are called to the polls to choose their deputies.

There are 598 seats up for grabs in the Bundestag, the lower house of parliament. And it is these deputies who will appoint the one who will occupy the chancellery instead of Angela Merkel.