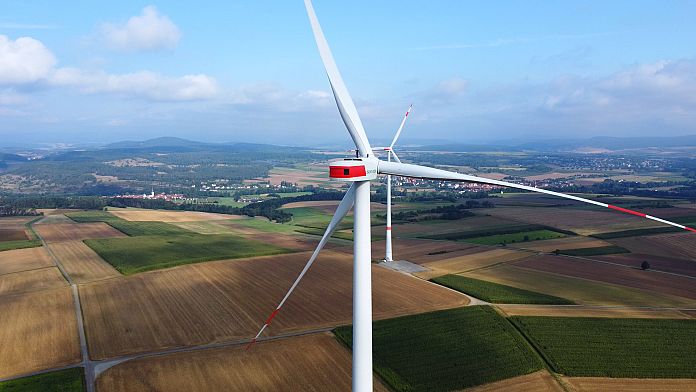 A wind of change is blowing over Germany ” s. In the run-up to the general elections on 26 September, the issue of the energy transition occupies an important place in the political debate. The country must, by law, achieve carbon neutrality by 2045. But the journey is fraught with pitfalls.

While the major parties are in favour of solar and wind energy, bureaucracy and angry residents are holding back these changes. In Bavaria, for example, in the rural district of Rhön-Grabfeld, Erich Wust suffered the administrative burdens of the system.

Whether it is building permits issued with delay, or legal actions brought by the neighborhood, this wind farm manager wants real change after the elections.

“If we want to boost renewable energy, we need to get rid of all the barriers,” he laments. And sometimes local rules, stemming from German decentralization, add even more complexity.

“Especially in Bavaria, we need to get rid of this 10-H rule,” he says, referring to legislation that requires a distance equivalent to ten times the size of a wind turbine, compared to neighboring houses.

“This 10-H rule is why no wind farm permits have been filed in Bavaria in the last two years,” he notes.

This rule also does not satisfy the residents, who complain that they can no longer “get building land”.

“Our municipality can no longer allocate new residential areas due to the two planned wind farms” complains Hubert Warmuth, Wargolshausen city councilor at a meeting of wind opponents.

“80% of the inhabitants of Wargolshausen oppose it,” said Monika Zimmer of the Rhön-Grabfeld district association for the protection of the environment and cultural heritage. “1,700 people have signed our petition,” she adds.

Other residents of the area say they feel “invade“by wind turbines from a height of 200 meters, fearing that their homes “lose value“.

In Wargolshausen, an absurd administrative battle lasted even ten years. The latest legal twist : investors have been forced to destroy the foundations of future modern wind turbines, which are supposed to be quieter and more efficient, and replace them with older structures … all this due to a complaint filed by a neighbor who settled in the rural area, nearby.

“We wasted six million euros with this project. It can’t go on like this“complains the investor concerned, Jürgen Rüth.

“_IN the future, we need some reliability in energy policy. Almost all parties have included it in their agenda : the licensing authorities must speed up the decision-making process. Reliability is necessary, because the energy transition is necessary. What happened here is a catastrophe, ” warns his associate, Harald Schwarz.

He wants politicians to have “a strong spine and assurance to prevent such a dilemma from happening again“.

The role of anti-renewable pressure groups

“Today, in 2021, the main interest of the natural gas industry is to stop the energy transition. Their lobby has enormous influence and it’s dangerous“he denounces.

“We must put an end to the game of these lobbyist politicians. We should blame them : you are the climate polluters. We cannot afford to lose four years again“.

In Ebersberg, a rural district near Munich, a new mode of public participation is at work. The county held a public vote on installing wind turbines in the state forest, away from homes.

The local “energy agency” was tasked with distributing information to voters and setting up role-playing games on how to reduce CO2 levels.

Composed of models simulating energy consumption, these games allow to obtain, in real time on a screen, the impact of wind or solar in a local energy policy. Thanks to this playful and educational consultation, a majority of citizens approved the use of wind turbines.

“The department of Ebersberg aims for climate neutrality by 2030. The main pillar for the future will be more photovoltaics and, very importantly, more wind turbines“explains Manuel Knecht, from the energy agency. “This is the only way to accomplish the energy transition. Looking at the impact if we build or don’t build wind turbines. We see that we need to install them to achieve the goal.”

Wind turbines in the forest ?

If the majority of citizens gave their consent, some continent to oppose the installation of wind turbines in the logging forest of Ebersberg, one of the largest in Bavaria. A legal action is in preparation.

“They want to put the five wind turbines, deep in the forest“laments Kerstin Mertens, member of the forest protection society. “The Ebersberg district could find enough space/land outside the forest to install the wind turbines“adds Benedikt Sommer, from the association for the protection of birds.

The two opponents warn about the consequences that animals could suffer, when faced with the blades of wind turbines.

For its part, the “banded apivore“, a rare species of protected raptor, is “in danger of collision“explains Benedikt Sommer. “They have their breeding place here, and a few rare pairs. Every collision victim would be a huge loss“.

Protect the species or each individual ?

For their part, Sören Schöbel and Lea Steiner stress the need to combat the accelerating climate catastrophe. Living in nearby villages, they recall that this forest was planted, and is intended for exploitation for economic reasons.

“In Germany, there are currently some 30,000 wind turbines. There is no doubt that if we take the energy transition seriously, including the energy needs of our industry, we need double or triple wind power“analysis Sören Schöbel, professor of landscape architecture.

On an agricultural level, solar can also be a solution. Karl Schweisfurth decided to turn to this new energy source for his farm, located in Herrmannsdorf.

“We have enough roofs in the sector to put photovoltaic and produce all the necessary energy“he explains, revealing the panels stored in his barn.

“The farmer there owns three huge barns. For its own operation, it does not need as much energy as it could produce on its roofs. If he received decent compensation for the generated electricity injected into the grid, we could have fewer panels. No need to get 30 cents (per kilowatt hour) – 15 or 18 cents would be enough“he believes.

The next German government will have to make choices about renewable energy. One thing is certain, the legal framework must be urgently revised, for the energy transition to work.