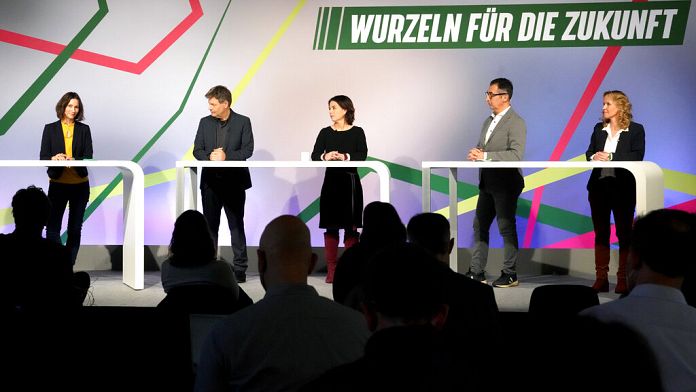 It is a long chapter in contemporary German history which is coming to an end: the Bundestag will elect the Social Democrat Olaf Scholz on Wednesday as chancellor, at the head of an unprecedented parity government, and turn the page on the Merkel era.

The last step towards the investiture of the future German Chancellor, Olaf Scholz, was taken on Monday. Green members validated 86% of the coalition agreement. The Social Democrats of the SPD and the Liberals had done the same over the weekend.

The three parties, called to govern together for the next four years, will officially sign the agreement on Tuesday. “We are very happy with this great result. We are now launching, with strong voter support, this new federal government, made up of a very strong and diverse cabinet.“said Annalena Baerbock, co-chair of the German Greens and future foreign minister.

A little over two months after winning the legislative elections at the end of September, Mr Scholz will be elected by the Bundestag at the head of an unprecedented three-party coalition, formed much faster than expected, by the Social Democrats of the SPD with the Greens and the Liberals.

For the first time, a parity government will then take office, with women appointed to key ministerial positions such as Foreign Affairs, the Interior or Defense.

“I am particularly proud that women are now at the head of ministries for which it is not traditional“that they are occupied by women, greeted Monday Mr. Scholz, who for a long time asserts himself feminist.

Despite the unabated popularity of Merkel after four terms, Scholz, who willingly presents himself as his heir, intends to give new impetus. “I want the 2020s to be a new beginning“, he said in the weekly Die Zeit, claiming to want to implement”the greatest industrial modernization“from recent history”capable of stopping man-made climate change“.

His government also promises a very pro-EU policy aimed at “increase the strategic sovereignty of the European Union“and better defend the”common European interests“. The future head of diplomacy, environmentalist Annalena Baerbock, intends at the same time to adopt a harder line with regard to authoritarian regimes such as China and Russia.

But the future government will not experience a state of grace. He must immediately focus on his first big challenge: the management of the resurgence of the Covid-19 pandemic, which particularly affects Germany.

Mr. Scholz, elected experienced but not very charismatic, intends in particular to quickly vote the vaccine obligation, supposed to come into force in February or March. This radical measure, already chosen by the Austrian neighbor, is supported by around two thirds of Germans but it risks hurting a large part of the population, in particular in the former GDR.

In the meantime, Mr Scholz, Ms Merkel and the 16 regions have agreed to new restrictions targeting exclusively the unvaccinated, banned from cultural venues, restaurants and other non-essential businesses.

The former mayor of Hamburg, who like his predecessors will reserve his first visit to France, will also have to deal with an unfavorable economic situation, weighed down by weaker growth than announced and the return of inflation. Mr. Scholz has a plethora of other projects to carry out, which do not necessarily win the approval of the Germans.

The planned increase in the minimum wage, the anticipated exit from coal or the development of renewable energies are popular, according to a survey for the public channel ARD.

Other promises of the “traffic light” coalition such as over-the-counter cannabis, the purchase of armed drones by the Bundeswehr or the right to vote at 16, on the other hand, are only supported by a minority.

And on the climate, despite the “most ambitious program that a government has ever presented”, the goal of limiting global warming to 1.5 degrees seems unattainable at this stage, according to a study carried out for the German Climate Alliance.

Covid-19 in France: a Defense Council to arm itself against a galloping epidemic