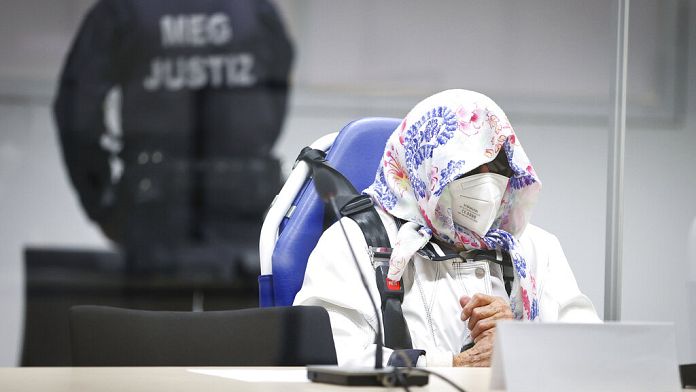 The 96-year-old former secretary of a Nazi concentration camp remained silent on the first day of her trial Tuesday in Germany to which she presented herself after a bizarre escape attempt three weeks earlier.

Arriving in a wheelchair and holding a cane in his hand, Irmgard Furchner listened without saying a word to the indictment for complicity and attempted murder in more than 11,000 cases in the Stutthof concentration camp, in present-day Poland, between 1943 and 1945.

She “will not make any statements at this time. She will also not answer questions,” said her lawyer Wolf Molkentin.

Ms. Furchner spoke only to confirm her identity at the request of the President of the Itzehoe Court (north). A total of 27 hearings, limited to two hours a day due to the age of the accused, are scheduled until June 2022.

Her trial had begun on 30 September in an extraordinary way: the nonagenarian, who lives in a residence for the elderly near Hamburg, fled instead of going to court, forcing the court to postpone the first hearing until 19 October.

She appears free, but surveillance measures have been taken to ensure her presence at the hearings.

The prosecutor’s office accused her of “aiding and abetting the treacherous and cruel murder” of thousands of prisoners between June 1943 and April 1945 in the camp where she worked as a typist and secretary to the camp commander, Paul Werner Hoppe.

Aware of the crimes?

In this camp near the city of Gdansk (Danzig at the time) where 65,000 people perished, “Jewish inmates, Polish partisans and Soviet prisoners of war” were systematically murdered, recalled the prosecutor’s office.

Through her duties, she “ensured the proper functioning of the camp” and “had knowledge of all events and events in the Stutthof camp”, including killings by shooting or gassing, Prosecutor Maxi Wantzen explained.

In a recent interview given in 2019 to the newspaper NDR, the former secretary had indicated “having known nothing” about the massacres committed in this camp.

Explaining that Ms. Furchner did not deny the Holocaust and Nazi crimes, her lawyer, however, questioned her criminal responsibility, questioning “the extent to which a typist in the camp’s management actually had a thorough knowledge of the procedures and acts” committed there.

Before her trial, the accused had announced in a letter to the President of the Court that she did not want to appear before her judges.

On the first day of the hearing, she got into a taxi and disappeared for a few hours, before being found. She was remanded in custody and released a week later.

The next hearing is scheduled for October 26 at which witnesses will be invited to the stand as well as a historian.

Seventy-six years after the end of World War II, Germany continues to search for former Nazi criminals who are still alive, illustrating the increased severity, albeit belated by victims, of its justice.

The investigators also extended the investigations to the sometimes subordinate enforcers of the Nazi machinery.

Another defendant, 100-year-old Josef Schütz, began appearing on 7 October at the court in Brandenburg-on-the-Havel (northeast), where he claims his innocence.

The oldest accused of Nazi crimes, this former non-commissioned officer of the SS division “Totenkopf” (“Skull”) is prosecuted for “complicity in the murders” of 3,518 prisoners while operating in the Sachsenhausen concentration camp between 1942 and 1945.

“The individuals suspected of Nazi crimes still alive today were very young at the time and rather occupied subordinate positions,” Guillaume Mouralis, director of research at the CNRS and member of the Marc Bloch Center in Berlin, told AFP.

“The paradox is that the +office criminals+ at the middle and upper echelons of the hierarchy have finally been little worried,” he adds.

*Contrary to what is stated in the video report, the accused faces up to 10 years in prison, because she was tried by a court as a minor (she was under the age of 21 at the time).