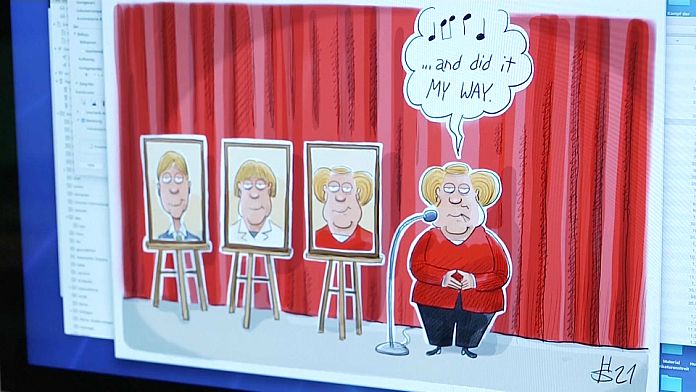 Germany brings down the curtain on Angela Merkel”s sixteen-year reign. The end of a cycle also for cartoonists, such as Heiki Sakurai who made no less than 2953 drawings of the chancellor.

So make room for new faces with this central question today : who of Armin Laschet or Olaf Scholz will be the future chancellor ? The social Democrat has already won the hearts of the Greens.

One of the strong images of this election night will remain that ofAngela Merkel long standing ovation by supporters of the CDU / CSU. A clap of end for the chancellor and may also be for the German conservatives and their new leader Armin Laschet, who is struggling to federate.

Lena Roche, euronews correspondent in Berlin :“Last night, at the CDU headquarters, Angela Merkel was much more applauded than Armin Laschet. With Merkel’s withdrawal from politics, the CDU also lost many votes to the SPD and the Greens. A historically low result for the Conservatives means that the party, which has admittedly been spoiled by power so far, will have to adapt.”