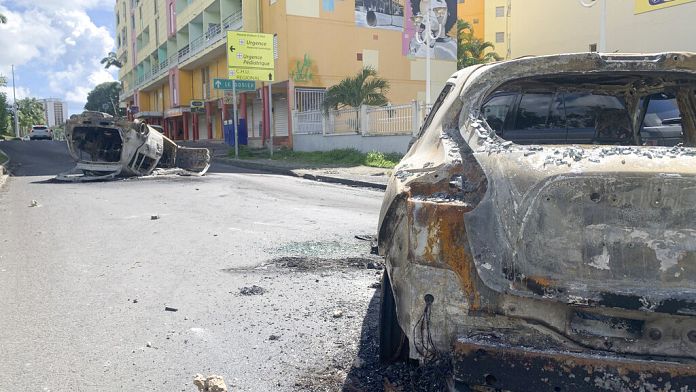 Guadeloupe and Martinique are facing two general strike movements, launched a few days apart. The demonstrators are demanding in particular the end of the vaccination obligation. The tone has hardened in recent hours: according to the police, the police came under live ammunition.

The general strike was decided by an inter-union as of Monday. The movement was renewed on Tuesday.

This results in blockages on the main roads. Access to the agglomeration of Fort-de-France, in central Martinique, is impossible from the south and north of the island. Trucks, taxis, but also pallets and tires have been placed at strategic points on the road network.

The police, as well as firefighters, were targeted by gunfire and projectile throws as they intervened on trash fires lit on the public highway in the Sainte-Thérèse district. in Fort-de-France, according to police sources.

” We tell the prefect to respect us », Launched Eric Bellemarre, general secretary Force Ouvrière Martinique, on the antenna of the radio RCI Tuesday morning.

” The Prime Minister announced that it was necessary to open a space for dialogue but his local representative did not have to receive the message », Added the union leader.

The strikers are indignant at not having been received Monday by the prefect of Martinique at the end of the first day of demonstration, justifying the hardening of the movement.

In Guadeloupe, the call for a general strike was launched on Monday, November 15. The protest movement has therefore lasted for more than a week. It degenerated into a social crisis punctuated by numerous violence with barricades, looting and fires.

“More than 90 arrests” and “more than 60 police custody“have taken place since the start of the crisis, Interior Minister Gerald Darmanin said on Tuesday.
250 police and gendarmes, including 50 from the GIGN and the Raid, were sent as reinforcements over the weekend and a curfew was put in place from 11:00 p.m. to 5:00 a.m.

” What is certain is that the reestablishment of public order is obviously the prerequisite for any discussion. », Specified the French minister, indicating that the gendarmes had been the target of fire with live ammunition.

The grounds for the dispute

At the origin of the movement in Guadeloupe, there is the challenge of the vaccination obligation of caregivers. To date, more than 80% of medical personnel have been vaccinated. Those who refuse vaccination have been suspended. And it is this suspension which is today denounced by the demonstrators.

The protest is led by a collective of associations and unions. At the point of mobilization, the General Union of Workers of Guadeloupe (UGTG). The general secretary of the union, Maïté Hubert M’Toumo, said in a press release that the vaccination obligation was in fact ” the drop of water that broke the camel’s back “. For her, the mobilization translates “the depth of suffering, inequalities, poverty and exclusion suffered by the population, especially the young and the elderly“.

The group of organizations has thus drawn up a list of demands: generalized increase in wages, social minima, unemployment benefits and retirement pensions, replacement of all retirements, end of layoffs, in the private sector and cuts. of posts, in the public …

How to get out of the deadlock?

The French Minister for Overseas, Sebastien lecornu, indicated on Tuesday that he did not intend to go there immediately so as not to “present a particularly significant overhead for the police“which are all already on the ground.

A videoconference meeting was held on Monday in Matignon around Jean Castex, in isolation after testing positive for Covid-19. This meeting resulted in the creation of a “dialogue instance“in order, according to the Prime Minister, to”convince and support individually, humanely“, the professionals concerned by the vaccination obligation.

A decision that did not convince in Guadeloupe where the unions behind the mobilization deplored not being associated with the initiative.

In Guadeloupe and Martinique, delegations of demonstrators were expected on Tuesday in the prefectures of Pointe-à-Pitre and Basse-Terre.