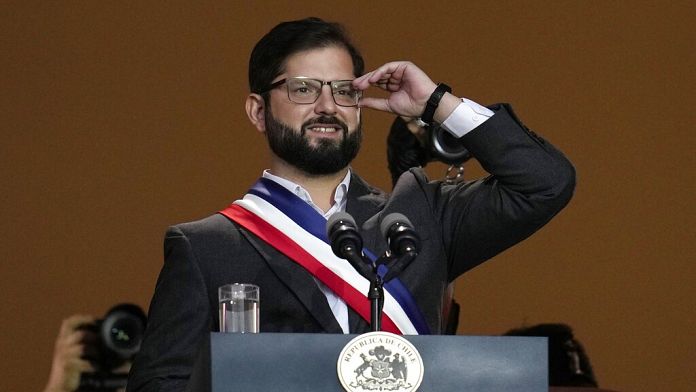 Gabriel Boric officially became the youngest president of Chile on Friday at the age of 36 during a swearing-in ceremony prefiguring the profound changes he intends to lead to the head of a government he wants to be ecologist, feminist and at the same time. strong social footprint.

Visibly moved during the Chilean anthem, wearing the tricolor scarf that had just been abandoned shortly before his now predecessor, Sebastian Pinera (2010-2014, 2018-2022), Gabriel Boric swore, according to tradition, to respect the Constitution”before the Chilean people“, but hastened to add: “all chilean peoples“, a reference to indigenous peoples, especially Mapuches.

The 24 ministers of his government, 42 years old on average and mainly composed of women (14 out of 24), in particular in the sovereign positions of the Interior, Defense or Foreign Affairs, then also took the oath.

About twenty international dignitaries attended the dubbing of the representative of a new generation of Chilean politics, including the Argentine presidents Alberto FernándezPeruvian Pedro CastilloUruguayan Luis LacalleLouseBolivian Luis Arce or the king Felipe VI of Spain.

At the end of the ceremony at the seat of Parliament in Valparaiso (150 km northwest of Santiago) from which the new president emerged on the arm of his companion, the new First Lady Irina KaramanosGabriel Boric said he felt a “great sense of responsibility and duty to the people“.

“We will do our best to meet the challenges we have as a country“, he added before boarding a convertible car driven, for the first time in the protocol, by a woman.

The former student leader, MP since 2014, who as usual did not wear a tie, must now strive to keep the promises that brought him to power and raised immense hope among his supporters. He said to himself “convinced that the vast majority of Chileans demand structural changes“.

Political heir to the social revolt that shook Chile in 2019, considered until then as the most stable country in the region, the president elected in December at the head of a left-wing coalition must find answers to the demands for transformation health, education and pension systems as well as the requirements for reducing inequalities.

According to him, the solution lies in the establishment of a welfare state inspired by European social democracy and the break with neoliberalism of which Chile was the laboratory under the dictatorship ofAugusto Pinochet (1973-1990).

If the economic results of Chile for thirty years have been hailed and envied, they have been obtained at the cost of great inequalities (1% of the population owns 26% of the wealth, according to the UN) and led to 2019 violence.

The outgoing president had been forced to give in to the demand for a new Constitution to be drafted. After the election of the members of a Constituent Assembly, its development is in progress and its new version will be submitted to referendum in 2022.

“We are not starting a new chapter in our democratic history. We don’t start from zero, there is a story before us that elevates and inspires us“, however, had tempered Mr. Boric on January 21 when his government announced that he also wants “ecologist”.

“Boric begins in a favorable climate of public opinion, thanks to the political capital he obtained in the elections and with the appointment of his government” open to various sensitivities, augurs Marco Morenodirector of the School of Political Science at the Central University of Chile.

But he will have to reform by bringing together a Parliament far from being won over to his cause: “the great challenge that Boric will have to take up is to establish a dialogue to overcome the legislative obstacles in order to have the capacity to finance his desires for state- providence”, believes Mr Rodrigo Espinozaacademic at Diego Portales University.

He will also have to face the mistrust of elected radicals on the right and on the left as to his ability to achieve the social changes he promises while his room for maneuver is reduced by the slowdown in the Chilean economy.

The Pope praises the “gift” of “celibacy”: colloquy at the Vatican on the role of priests