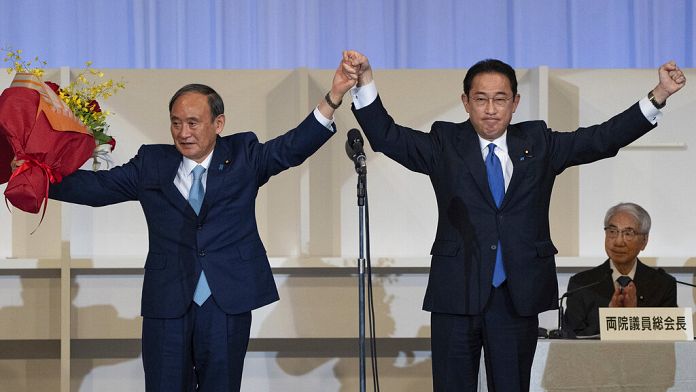 The moderate Fumio Kishida was elected by a large majority to lead the Liberal Democratic Party, Japan’s ruling right-wing party,

A 64-year-old former foreign minister, he secured 257 votes in the second round of an internal party poll against his opponent Taro Kono”s 170 votes.

Fumio Kishida is guaranteed to be appointed Prime Minister in the vote that will take place in Parliament on October 4.

The current Prime Minister Yoshihide Suga, unpopular in public opinion after a year at the head of a country marked as elsewhere by the health crisis, had decided not to run in this election of the LDP which has dominated Japanese politics since 1955.

Fumio Kishida must now lead his party to the battle of the parliamentary elections to be held by November, for which he starts as the favorite.

“We need to show the public that the LDP is resurrected and needs its support” for these elections to both houses of Parliament, he said after his victory. “Let’s go to the election united,” he said.

In his speech, Fumio Kishida promised to pass stimulus packages worth several billion euros, a commitment that could be decisive in order to collect the vote of the public, unhappy with the government’s management of the pandemic.

Kishida, head of Japanese diplomacy from 2012 to 2017 and heir to a family of politicians, had failed in 2020 against Suga.

But Mr. Kishida’s consensual personality, perceived by some as uncharismatic, reassured LDP parliamentarians, deeming him “a safer bet for stability, longevity, etc. They have already made this bet in the past,” according to analyst Brad Glosserman, an expert on Japanese politics and professor at Tama University.

Fumio Kishida should not depart from the line of his predecessors in defence, diplomacy and economics.

Affirming his desire to reduce social inequalities and pursue a “policy of generosity”, he said, however, at the same time wanted to clean up public finances.

“There is a certain vagueness about his deep convictions,” commented Corey Wallace, a senior lecturer at Kanagawa University, near Tokyo. “There is nothing that stands out particularly on what will be his main workhorse”.

Many challenges await the future Prime Minister, from leading a post-pandemic economic recovery to threats from North Korea and China.