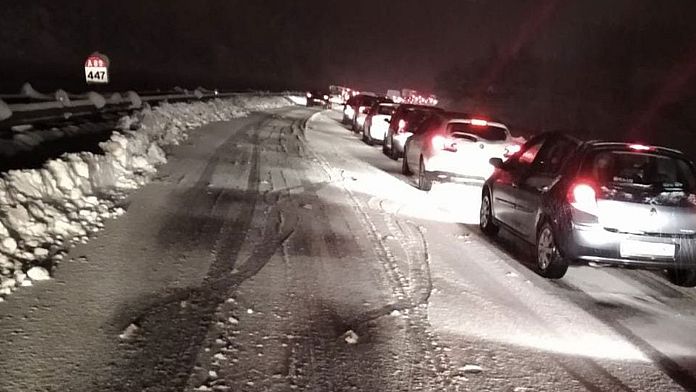 The snow is invited on the roads of France and caused quite a mess on certain roads. Nearly 200 people were thus lodged in the night from Sunday to Monday in the region of Haut-Forez (Massif Central, department of Loire), after the closure of the A89 motorway linking Lyon to Bordeaux due to snow.

Some 150 people were welcomed in the village hall of the Halls commune, and about fifteen others in that of Noirétable, in the north-west of the Loire department.

The A89 had been closed to traffic on Sunday shortly after 6 p.m. in both directions near Thiers (Puy-de-Dôme department) due to snow.

The teams then intervened to clear the vehicles across, “mostly not fitted with snow tires“, especially a heavy vehicle, according to Vinci Autoroutes.

During the time of this intervention, “one to two hours according to Vinci“, blockages occurred, concerning 600 vehicles in the evening, according to the prefecture, which specifies however”that no passenger has spent the night at a standstill“on this axis.

The cleared tracks could then be cleared of snow overnight, until the reopening Monday morning at 6 a.m.

The department of Puy-de-Dôme had been placed in snow-ice orange vigilance, like other departments of the Massif Central.

The other people rescued by firefighters, gendarmes and members of the Red Cross were stranded on secondary axes of Haut-Forez.

In France, since November 1, safety equipment, such as winter tires or chains, is compulsory in the mountainous regions of the country. In the facts, 34 departments are concerned by this new regulation.