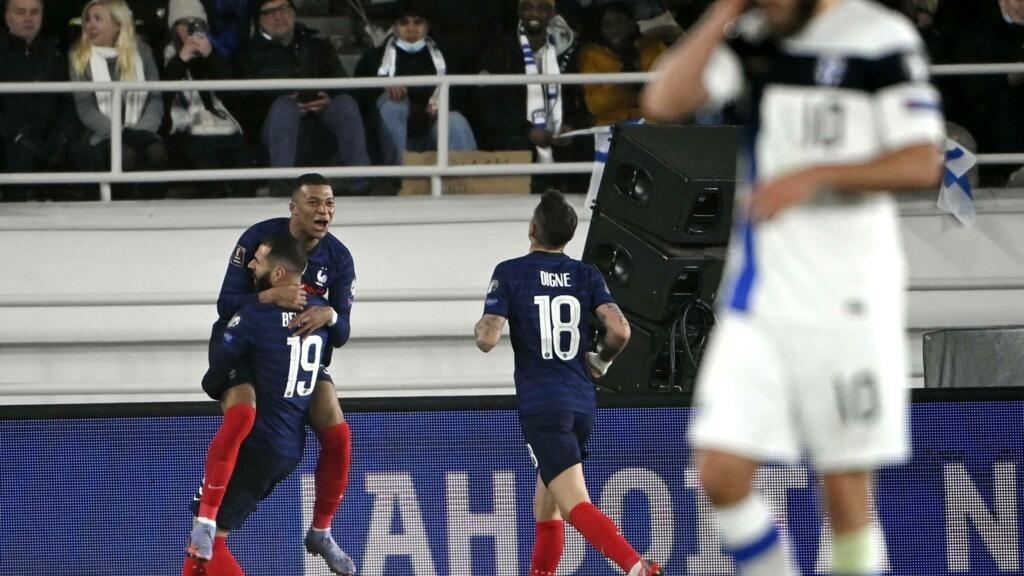 Already qualified for the World Cup-2022, the Blues ended their qualifying phase by beating Finland 2-0 on Tuesday in Helsinki. With a goal signed Mbappé and a second Karim Benzema, France ousted Finland from the race.

Already qualified for the World Cup-2022, the Blues closed the year 2021 with a late 2-0 victory, Tuesday, November 16, in Helsinki against Finland, with Karim Benzema and Kylian Mbappé as executioners of the premises, deprived of dams.

The France team had provided the show – at the same time as its ticket for Qatar – on Saturday against Kazakhstan (8-0) at the Parc des Princes. Not greatly worried nor madly inspired, this time she made a copy more than boring with a starting “eleven” reworked against “Eagle Owls” in no hurry to attack.

The sporting stake was quite limited, of course, for the men of Didier Deschamps who, at the kickoff, had made five changes compared to the team lined up when entering Paris. Alas, the lucky winners of the evening have scored few points for the World Cup in a year (November 21 – December 18).

Perhaps the most frustrated will be Moussa Diaby. The Bayer Leverkusen striker, tiptoeed at the start of the season, had almost no ball to get under his crampons, except for this recovery easily captured on a center from Lucas Digne (5e).

Most unhappy? Léo Dubois, tenured in the right lane and forced to leave the field supported by the medical staff, after visibly slammed behind the right thigh on a defensive fold (43e). The OL captain is very likely forfeited for the reception of Marseille on Sunday in Ligue 1.

As for Kurt Zouma, Lucas Digne and Aurélien Tchouaméni, they neither shone nor cracked, in the crowded Olympiastadion of the Finnish capital.

The nearly 32,000 local spectators, who had activated smoke and fireworks in the streets before the meeting, came out disappointed from the historic walls of Helsinki, after being blown away from their place of barrage by Ukraine , victorious in Bosnia-Herzegovina (2-0) at the same time.

Their star Teemu Pukki, for his 100e selection, gave them some chills (30e, 33e, 34e), but the Norwich forward was either imprecise or blocked by Hugo Lloris.

The fatal chill came from the entry of Karim Benzema, spared at kickoff but launched by Didier Deschamps before the hour mark in place of Diaby. And from the start, the Real Madrid center-forward warmed the gloves of Lukas Hradecky, the captain of the Owls (58e), as a warning.

Four-month break for the Blues

At the 66e minute, the candidate for the Golden Ball used a subtle deflection in the area of ​​Kylian Mbappé to find the net, a strike slightly deflected by Leo Väisänen (1-0, 66e).

The decisive passer, author of a resounding quadruplet on Saturday against Kazakhstan, then got rid of the same Väisänen in the race before rolling up a nice shot from the right (2-0, 76e).

With this late success, the Blues have provided most of their trip to Finland and can approach the winter with the satisfaction of a job well done. They now have a long break of four months before putting on the blue jersey again at the end of March.

Antoine Griezmann’s partners could join Qatar at that time to play a few friendly matches, a way to make their mark before defending their title at the end of next year in the Gulf kingdom.

NBA | Basketball – NBA: Westbrook’s confession on his failed debut with James and Davis!