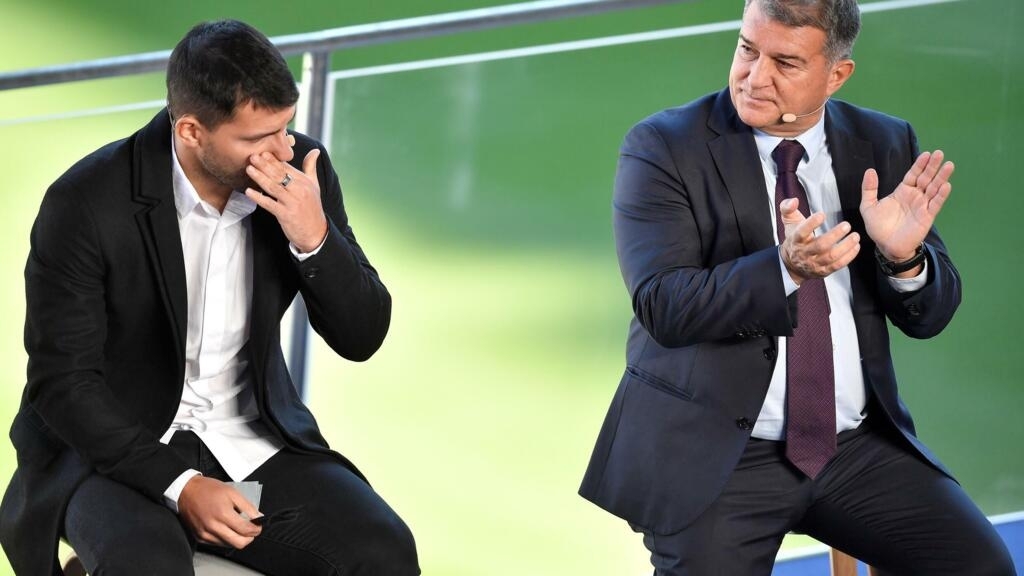 In tears, Argentinian international footballer Sergio Agüero announced his retirement on Wednesday at the age of 33, due to heart problems, when he had just joined FC Barcelona.

The heart has its reasons that reason must respect: the Argentine striker Sergio Agüero, recruited last summer by the FC Barcelona, announced Wednesday, December 15 his forced retirement at 33 years old due to heart problems.

Crying, voice shaking at a press conference, “Kun” explained “quitting professional football” after doctors confirmed to him that it was “the best decision.”

For the winner of the Copa America 2021, great friend of Lionel messi and son-in-law for four years of Diego Maradona, the nightmare began on October 30: at the 40e minute of the match against Alavés, for the 12e La Liga day (1-1), he lies down on the ground, touching his chest and neck, victim of discomfort.

Rescuers intervene and the Argentinian manages to get up and walk out of the field. His coach at the time, Sergi Barjuan, asks him how he is feeling. “Not good”, replies Agüero, evacuated to a hospital in Barcelona. The next day, Barça announced that the player “suffered from chest discomfort”.

Deprived of a fourth World Cup

The news of this retirement comes six months after the cardiac arrest of the Danish Christian Eriksen, in full Euro, in June 2021. The player, resuscitated on the lawn, has since had a defibrillator implanted to prevent the risk of sudden death which banned him from playing in Italy, where the midfielder played at Inter.

For his part, the French winger of Bayern Munich Kingsley Coman (25), who also suffers from a mild arrhythmia, can continue to play, just like the German of Hertha Berlin Sami Khedira.

Deprived of a fourth World Cup in Qatar, Agüero left a career punctuated by successes and records.

Man of the 94th minute

He landed in Europe at Atlético Madrid in 2003, after a flamboyant debut at Independiente. After five seasons with the “Rojiblancos”, with whom he won the Europa League in 2010, he flew to England.

Agüero immediately enters the legend of Manchester City, to whom he will remain faithful (2011-2021). For the Citizens, he scored probably the most famous goal of the Premier League, that of the title won in 2012, on the last day against the Queens Park Rangers.

At the 94e minute, when the score is 2-2, he inherits a ball slipped by Mario Ballotelli, feigns then finds the net to offer the Citizens their first title of champion of England since 1968, topping at the post the rival Manchester United .

“Sergio is quite simply the most ruthless striker in Premier League history,” City boss Khaldoon al-Mubarak said in a statement. “He deserved the adoration of the City family and the respect of the football world around the world.”

The most prolific foreign scorer in the English championship with 184 goals, he conquered fifteen titles, including five English Championships, with City, leaving all the same a great void: the Champions League, which was again refused to them in final in 2021 against Chelsea (1-0).

The football world has scrambled to pay tribute to the “legend” Agüero on social networks. “An extraordinary striker (…), a great teammate, a friend and a personality apart,” said defender Vincent Kompany, a companion of the early years, while David Silva, now at Real Sociedad, spoke of his “pride in sharing so many moments together, on and off the pitch”, echoing the messages of Kevin de Bruyne or Leroy Sané.

Transferred to Barça in the summer of 2021 in the hope of evolving with Messi, Agüero saw his plan fail when the “Chip” rallied Paris Saint-Germain. But the two Argentines will remember having won the Copa America, after failing in the 2014 World Cup final against Germany.

“We had some wonderful moments and others that weren’t really so, but they brought us all closer and made more friends (…). I love you so much, my friend, I will miss you very much” , testified Leo Messi on his Instagram account.

The Argentine federation also showed the gratitude of all the Argentine people. “Thank you ‘Kun’! Thank you for all these years of football, all these grigris, these goals, and the joy in the selection. You will be in the hearts of every Argentinean forever,” Afa promised.