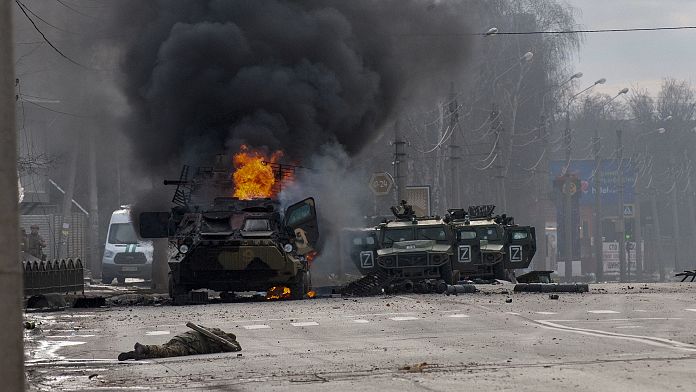 The Russian offensive on Ukraine, which is resisting fiercely, continues on Monday the day after the nuclear threat brandished by Vladimir Poutineto which the Europeans responded by promising to supply weapons to Kiev.

The White House announced for its part that the President Joe Biden would meet on the phone with his allies on Monday, without specifying their identity, at 5:15 p.m. (Paris time), to “to coordinate” a “united response” It front of “developments” of the Russian attack.

Westerners have already decided on heavy financial sanctions against Moscow, and the first effects appeared on Monday: the European Central Bank noted the “bankruptcy or probable bankruptcy” of the European subsidiary of the Russian bank Sberbank, among the largest in the country, and the ruble fell by almost 30%. In addition, the price of a barrel of WTI crude oil jumped by more than 5%.

Monday, the 193 members of the United Nations General Assembly meet in “emergency special session” to comment on the conflict, which has killed since Thursday, according to Kiev, some 200 civilians and dozens of soldiers.

Vladimir Putin, whose forces on the ground are facing Ukrainian resistance and Western mobilization, ordered on Sunday to “put the deterrent forces of the Russian army on special alert”with regard to nuclear forces, invoking “the bellicose declarations of NATO” and the penalties “illegitimate” imposed on Russia.

In response, Brussels announced that it would release 450 million euros to finance arms deliveries to Ukraine, ban Russian state media RT and sputnik and closing its airspace to all Russian aircraft, a measure also taken by Canada.

“For the first time, the EU will finance the purchase and delivery of armaments and other equipment to a country victim of a war. This is a historic turning point”underlined the President of the European Commission, Ursula von der Leyen.

Considerable evolution and potential source of escalation with Moscow which threatened any country coming to the aid of Ukraine, the EU announced on Sunday evening that it intended to provide combat aircraft to the Ukrainian forces.

Ukrainian President Volodymyr Zelensky welcomed the formation of a “anti-war coalition” international community to support Ukraine and called on foreigners to come and fight “against Russian war criminals” in “International Legion” Training.

“For the first time, the EU will finance the purchase and delivery of armaments and other equipment to a country victim of a war. This is a historic turning point”

President of the European Commission

“The situation in the capital of our homeland is under control”

On the ground, the Ukrainian army claimed on Monday morning that Russian forces had attempted “Many times” to storm the outskirts of Kyiv overnight, but that all attacks were repelled. “The situation in the capital of our homeland is under control”assured the army on Facebook.

The city, under curfew until Monday 8:00 a.m., was also targeted overnight by three Russian missile attacks, one of which was destroyed, said Oleksiy Arestovitchadviser to the Ukrainian President.

The city of Berdyansk (south, 110,000 inhabitants), is however now “occupied by our enemy”Arestovitch said in a video posted on Telegram overnight from Sunday to Monday.

For its part, the Russian Ministry of Defense claimed to have surrounded the city of Kherson (south, 290,000 inhabitants).

The Russian army for the first time on Sunday recognized human losses, without quantifying them.

Ukraine “will not capitulate”

The presidency of Ukraine has indicated that it has agreed to talks with Russia on the border with Belarus, near Chernobyl. Russia had indicated that they would take place this Sunday.

The head of Ukrainian diplomacy Dmytro Kouleba warned, however, that his country “will not capitulate”. “I don’t really believe in a result”corn “we have to try”said Volodymyr Zelensky.

The flood of refugees fleeing Ukraine continues to grow, as Kiev accuses Russia in the International Court of Justice of planning genocide in Ukraine.

Since Thursday, some 368,000 refugees have fled to neighboring countries and their numbers “keep increasing”, announced the United Nations High Commissioner for Refugees. The EU said it expected more than 7 million displaced people.

The France will take a resolution on humanitarian aid to Ukraine to the UN Security Council on Monday.

In Europe, hundreds of thousands of people in the yellow and blue colors of Ukraine marched to denounce the Russian invasion, and in Russia a few thousand people again defied the ban on demonstrations to say “No to war”.

Boycotts of Russia in sport are on the rise. Fifa has imposed on Russia to play its matches under a neutral banner and without an anthem and to play its home matches outside its territory.

“Peace is essential for health”, the vibrant appeal of the boss of the WHO