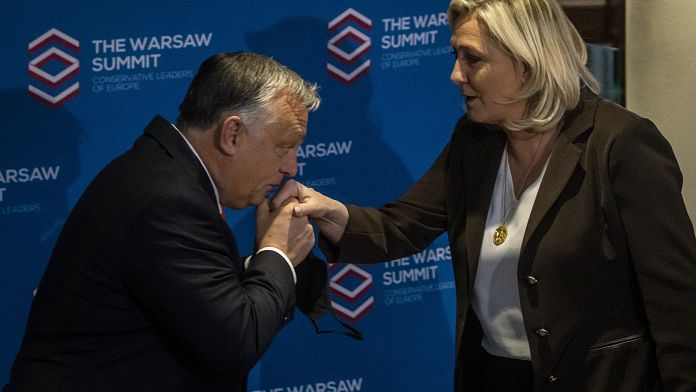 Gathered in Warsaw, the leaders of the European sovereignist and far-right parties debated the possibility of an alliance in Parliament with common votes.

The European Union “of sovereign countries”

Organizers of the summit, members of the Polish Law and Justice party (Pis), expressed their desire for a “Union of sovereign countries”. The latter denounce “a federal impetus” within the union with powers of the various institutions that are too extensive.

Close allies, Viktor Orban and Marine Le Pen were also in the game. If the leader of the National Rally was not defeated in the face of the lack of agreement, she admitted the difficulty of forming a large political group bringing together about fifteen parties. Indeed, for the moment, two distinct groups sit in the European Parliament.

During the meeting, some demonstrators marched and called the participants “traitors” and the event “Russian pact”. For European affairs expert Wojciech Przybylsk, the only purpose of the meeting is “increase popularity“(of the leaders) and for them of”not ultimately be superfluous during the next European elections“.

Building a “common front” within the European Union

These nationalist political movements are regularly criticized by the European institutions for not respecting the values ​​considered fundamental within the European Union. Lately, Poland has gone through a political crisis within the EU over its decision that the national constitution should take precedence over EU law.

Only a few weeks ago, the Poles were protesting against a possible Polexit. However, this event seems to move Poland away from leaving the Union, and bring it closer to building a common front on a European scale.