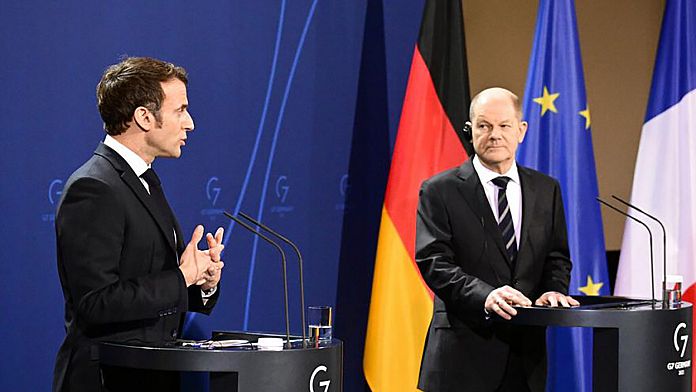 The Franco-German couple has gone through many crises in recent years and if there is one question that has constantly divided Paris and Berlin, it is that of defense and security. But the outbreak of war in Ukraine by Russia moved the lines by strengthening the position of the French authorities and changing that of their German counterparts.

In the last days before the invasionwe already observed an evolution according to Raphael Loss, coordinator of pan-European data projects at the European Council on Foreign Relations. “When you see the diplomatic efforts of Olaf Scholz and Emmanuel Macron to send the same message to Vladimir Putin, it certainly did not have the desired effect,” he said. “But they showed,” he continues, “that very strong coordination is underway in an area which in the past was problematic for the Europeans, namely cooperation in the field of defense and security.”

Faced with the war in Ukraine, greater coordination between Paris and Berlin

Since the start of the war, France has sent military equipment to Ukraine and accelerated the deployment of its troops on NATO’s eastern flank.

At the same time, in Berlin, against the background of demonstrations against the conflict, the new German government broke with the old official doctrine.

Thus, on February 27, Chancellor Olaf Scholz spoke in his own terms before the Bundestag “We decided yesterday that Germany would send defense weapons to Ukraine.”

“We will from now on, year after year, invest more than 2% of our GDP in our defence,” he said before adding: “The government’s draft 2022 budget provides for a special fund of 100 billion euros.”

Part of this money has already been allocated to the purchase of 35 American F-35 fighter jets.

What future for European defence?

The efforts of France and Germany to strengthen defense have certainly been welcomed by members of the European Union, but many are still wondering what this means for common defence.

In the short term, it will be a question of consolidating NATO’s eastern flank, according to SPD foreign policy spokesman Nils Schmid. The Union’s defense capabilities should also be strengthened by the “Strategic Compass” recently adopted, a veritable roadmap for European defense and security.

“It is now a question of developing armament technology ourselves in Europe, of setting up our own capabilities and of developing resilience, that is to say being able to act against non-military threats that weigh on Europe, disinformation campaigns and cyberattacks,” he told euronews.

The unknown of the presidential election in France

But in the long term, the elaboration of a common defense policy, let alone the creation of a European army, its role and the form that its action plan would take, will probably not be easy.

“If the French mission in Libya, for example, had been a possible European mission, Germany would have had to participate in it and that would have been very difficult from the German point of view,” pointed outStefan Seidendorfdeputy director of the Franco-German Institute (dfi) in Ludwigsburg. “So one way or another, we have to be able to vote on these issues following democratic procedures: it’s a very difficult challenge to meet,” he believes.

The future of European security is at stake in Ukraine, but also for Berlin, during the next French presidential election. Thus within the government of Olaf Scholz, we hope for the re-election of Emmanuel Macron and the maintenance of the new course taken by the Franco-German engine.

War in Ukraine: bombings in Mariupol, Zelensky and “the fate of victims”

Volodymyr Zelensky calls for worldwide protests for peace in Ukraine